This is interesting: apparently Sen. Claire McCaskill (D–Mo.) thinks she’s rounded up enough votes to eliminate the practice of secret holds. I had no idea this was even on anyone’s radar. However, Jamelle Bouie doesn’t think this will really make much difference:

I have no idea if McCaskill’s hold legislation will make it through the Senate; senators are very reluctant to give up their power, and this would diminish the ways in which individual senators can impose their preferences on the entire chamber. And of the possible avenues for reforming the hold, this isn’t my first choice. Like Jonathan Bernstein (of the fantastic Plain Blog About Politics), I’m not 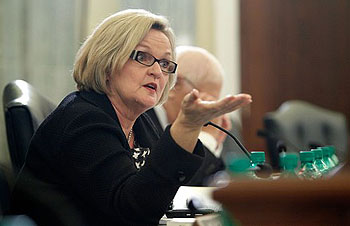 convinced that secrecy is the problem with the hold….Rather, the problem is that there are too many holds. Obstructionist senators are abusing Senate norms, and it’s not clear that McCaskill’s bill will address that core dilemma.

This is basically right, of course: holds are the problem, not secret holds specifically. Still, I guess there are two ways of looking at McCaskill’s bill. The first is that senators wouldn’t bother fighting against it if they didn’t really care whether their holds were public or not. So they must care. And if they care about their holds being public, then taking away secret holds should make holds less common. Unfortunately, the second way of looking at this is that if it were really going to make a difference, McCaskill wouldn’t have even a prayer of getting 67 votes. Republicans have shown an impressive ability to maintain a united front even on fairly innocuous issues, so if they’re divided this issue must be really innocuous.

So which is it? Beats me. But I hope McCaskill gets the votes regardless. The Senate is a public body and its official actions ought to be public whether or not it actually changes anyone’s behavior. Besides, you never know what use watchdog groups will be able to make of public records on holds. At the very least, it will force legislators to defend their holds, and I think they’re going to have a harder time doing that repeatedly with a camera in their face than they might think. In the end, I’ll bet that making holds public will reduce their numbers noticeably. Not dramatically, maybe, but enough to be well worth doing.