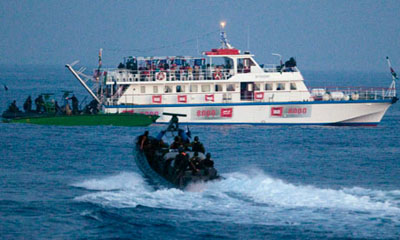 What I know already makes me worried for the future of Israel, a worry I feel in a deeper way than I think I have ever felt before. The Jewish people have survived this long in part because of the vision of their leaders, men and women who were able to intuit what was possible and what was impossible. Where is this vision today?

This is a subject I don’t write about often, but I pretty much feel the same way. I guess the difference between Goldberg and me is that I’ve felt this way for quite some time. Several years, at the least; maybe a decade, ever since the Camp David accords broke down; and maybe ever since the assassination of Yitzhak Rabin. It’s a little hard to say at this point.

It’s also a little hard to write about since I don’t have anything original to say. A million people have already said it. Fanatics on both sides have been in control of the region for years — the hardline Orthodox population relentlessly gaining influence in Israel and Hamas terrorists among the Palestinians — both convinced that they can win if they can only provoke enough insane overreactions from the other side. Which they do with depressing regularity. Hamas’s rocket attacks are indefensible, the Gaza embargo in return is indefensible, the blockade runners in their turn were plainly hoping to provoke an overreaction that would force Israel’s hand, and the Israelis then went insanely beyond anyone’s expectations by landing commandos on one of the ships and killing nine people while it was still far off in international waters. And now, there are rumors that the Turkish navy might escort the next ship that tries to run the blockade.

In David Petraeus’s famous phrase, How does this end? Unless something dramatic happens, it ends with Israel as a nuclear-armed pariah state. Where else can it go? Hamas and Hezbollah are never going to stop attacking, Israel’s responses will continue to get deadlier and more hysterical, the West Bank will never be freed because no Israeli government can any longer cobble together the public support it would require to take on the most extremist elements among the settlers, and like it or not, Israel eventually becomes a permanently armed camp and an apartheid state. Israelis may have hated it when that’s what Jimmy Carter called it, but even if it’s arguably not quite accurate today there’s very little question that it will be before long.

Unless something changes. But what? I guess it’s possible that a crisis like this can prompt both sides to get serious in a way they haven’t been for a long time, but there have been crises like this before and they haven’t prompted anything of the sort.

So help me out here. Is there any glimmer of hope on the horizon at all? Or is despair the only rational response to all this?