Starting in 2014 insurance companies will no longer be allowed to discriminate against people with preexisting conditions. They’ll have to take all comers for (almost) the same price, regardless of how healthy they are.

The incentive here is obvious: within the confines of the law, insurance companies will do their best to lure the healthiest patients into their programs and convince the sickest ones to switch. But how much leverage do they have to do this? Looking for clues, Aaron Carroll takes us back to a study done in 1997, when Medicare patients were allowed to switch back and forth between HMOs and traditional fee-for-service plans: 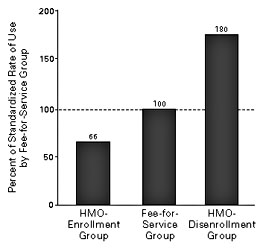 What did the researchers find? People who wound up joining the (private) HMOs used 66% less care before joining than those who stayed in the (public) Medicare group. Somehow the private insurance HMOs figured out a way to get the healthy people to jump ship out of the another plan into theirs!

Not only that, but people who left the (private) HMOs and went back to the (public) Medicare used 180% more care after leaving than the people who stayed. Somehow the private insurance HMOs figured out a way to convince the sicker people to jump ship back to the public plans.

Fascinating! But I’m not sure this tells us as much as it seems to. It does appear to tell us that private insurers are pretty good at marketing themselves to healthy people and then signing them up as customers. But the dice are loaded here: they were competing against a publicly funded fee-for-service program that didn’t care if the sickest patients got dumped on them. In fact, it’s worse than that: the fee-for-service folks probably wanted the sickest patients since it meant more money for them. So the private insurers may have done a good job of maximizing their profit, but only because their competition didn’t fight back. Under ACA, it’s mostly going to be private insurers vs. private insurers, and that’s a whole different ball game.

But what about the second half of this study, which shows that private insurers were good at dumping sick people? That’s more worrisome. It’s still the case that they could only succeed as well as they did because the public system wasn’t fighting back. But that only speaks to why they succeeded so brilliantly. When it’s private insurers vs. private insurers, dumping tactics probably won’t work as well, but they’ll still have to be used by any insurer who wants to stay in business. After all, if even one private insurer is aggressively trying to dump its sick patients, every other private insurer has to do the same thing if they want to stay profitable. In the end, the sick patients might all stay in the system (though there will probably be some leakage to Medicaid), but they’re going to be treated badly the entire time as insurers do their best to get them exasperated enough to try switching to someone else.

Aaron’s conclusion: “Insurance companies are very, very good at what they do. I don’t doubt that they will find ways to remain profitable. That’s not a moral judgment. I don’t hate them for it; it is their nature.” In other words, the fight isn’t over yet. The quality and detailed nature of the regulations HHS puts in place are going to make a big difference to the success of ACA. Insurance companies are going to be keeping a very sharp eye on this, and hopefully the rest of us will too.