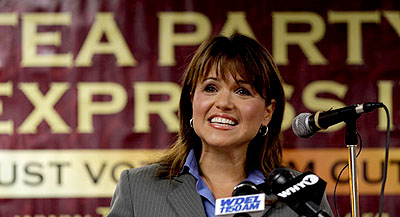 Every so often, a party nominates an unelectably extreme candidate, possibly because it’s deliberately testing the waters, though often it happens by accident. Then the party gets stomped at the general election….The next time around, the party bosses — who tend to lack all principles whatsoever — will move the whole apparatus to the center, where it can win the general election. How? With every single means at their disposal, and these are still extensive. You can see them at work even now, quietly trying to scuttle a Palin candidacy. The median voter theorem may not be in the front of Christine O’Donnell’s mind, or of Sarah Palin’s — neither shows much evidence of having considered it — but it isn’t entirely their party. Not by a long shot. The elites still bring things back to the center.

Not so fast. O’Donnell is only one candidate, and every professional politician knows that once you get a freight train barrelling forward you can’t control every last twist in the tracks. And it’s quite possible that the result of the Tea Party freight train this year will be lots of ultra-conservative victories and one or two preventable losses. Is that a reasonable price to pay? I don’t know, but I do know that there are plenty of liberals who’d be willing to make that trade in the opposite direction.

If O’Donnell loses in November and turns out to literally be the difference between 50 seats in the Senate and 51, then plenty of Republicans will be gnashing their teeth. But if the net result is that they get 46 seats instead of 47, and those 46 are considerably more conservative than they would have been without tea party fervor, I’ll bet most of them will consider it a pretty good bargain.

Of course, there are still Ken Buck, Pat Toomey, and Sharron Angle to contend with as well. It’s conceivable that they could all lose too, in which case tea party fervor might be responsible for four preventable own-goals. If that happens, then the establishment might indeed rouse itself to action. Except for one thing: the Republican establishment right now is dedicated to the tea party message heart and soul. It’s going to take more than a few midterm losses to convince them that doubling down on “true conservatism” isn’t the road to riches. I think sane conservatives are going to have to wait until the aftermath of 2012 at the earliest to have any chance of regaining any influence with their party.