The LA Times came out editorially today against Proposition 19, an initiative on the California ballot in November that would legalize marijuana cultivation and use. They don’t like the “chaos” that would ensue from every city having the ability to set its own regulations, and suggest that some kind of statewide framework should have been included. But even if it did, they say, Prop 19 would still have a fatal flaw:

Californians cannot legalize marijuana. Regardless of how the vote goes on Nov. 2, under federal law marijuana will remain a Schedule I drug, whose use for any reason is proscribed by Congress. Sure, California could go it alone, but that would set up an inevitable conflict with the federal government that might not end well for the state. That experiment has been tried with medical marijuana, and 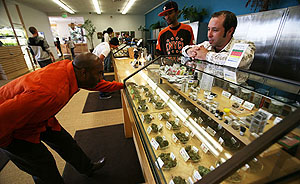 the outcome has not inspired confidence. Up and down the state, an untold number of residents have faced federal prosecution for actions that were allowed under California law.

This is (one of) Mark Kleiman’s beefs with Prop 19 too, but oddly enough, I find this to be one of the strongest reasons to vote for Prop 19. Frankly, I think a showdown with the federal government might be long overdue, and contra the Times, I’d say our experiment with medical marijuana, on balance, has been a good thing. (It hasn’t worked out very well in Los Angeles, which might be influencing the Times here, but that’s largely because LA politicians are morons who refused to draft regulations years ago when they should have.) But even if there have been abuses of the medical cannabis industry, California’s deregulation has paved the way for other states to do the same; it’s raised awareness (and probably tolerance for) marijuana use nationwide; and it’s proven that deregulation can work if local authorities handle it properly. Think Oakland, not LA. On the whole, I think it’s been a net positive.

Anyway, a showdown with the feds might not turn out well, but then again, it might produce some useful fireworks. Sometimes that’s what it takes to make progress.

(So am I going to vote for Prop 19? I’m tempted. But my presumption for voting No on all propositions is pretty strong, and Prop 19 really does have some drawbacks that are probably not suitable for enshinement for all time in the state constitution. So probably not.)

UPDATE: Oops, sorry. It’s not a constitutional amendment, it’s an initiative statute. That means it could be overturned as unconstitutional by a court, which is unlikely, but in terms of how easily it can be modified there’s not much difference between the two.