One of Tyler Cowen’s readers asks:

Why does the corporate world use language so inefficiently? Why turn a simple thing like “talking to a client about their needs” into a five-step process (distinguished, no doubt, by an acronym)? Do companies think that they create net value when they brand a common thing like human conversation as a one-of-a-kind, complex process — even after the costs of being opaque, jargonistic, and long-winded are taken into account?

My speculation: People disagree in corporations, often virulently, or they would disagree if enough real debates were allowed to reach the surface. The use of broad generalities, in rhetoric, masks such potential disagreements and helps maintain corporate order and authority. Since it is hard to 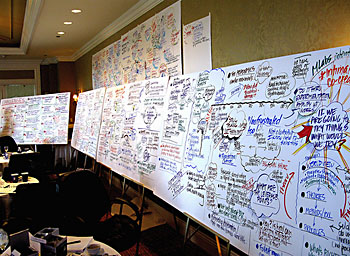 oppose fluffy generalities in any very specific way, a common strategy is to stack everyone’s opinion or points into an incoherent whole. Disagreement is then less likely to become a focal point within the corporation and warring coalitions are less likely to form.

This is an unanswerable question, but I think I’d offer a different kind of speculation. For starters, all professions develop their own jargon. Some of it sounds ridiculous and some of it doesn’t, but it seems to be practically a human universal. So I wouldn’t try to draw any special conclusions strictly from the existence of jargon itself.

More generally, though, why does an entire class that thinks of itself as so practical and results-oriented buy into so many of the fads that produce all this jargon? I don’t think it’s to reduce conflict. I would be very surprised if you found any correlation at all between faddish jargon and the amount of internal backstabbing in corporations. Instead, my guess is this: most businessmen aren’t really all that smart. When things go wrong they don’t know what to do. And when you don’t know what to do, anything is better than nothing. So you go searching for someone with an answer, and like all professions, the business world has plenty of people willing to offer them. Needless to say, though, those answers have to seem as if they offer something new and different, and that means flowcharts and five-point plans and a special lingo. It’s a truism that the easiest person to sell to is another salesman, and likewise, the easiest person to sell a new business process fad to is another businessman.

And for what it’s worth, I don’t think this is entirely bad. I know a lot of this stuff sounds ridiculous, but if you dig beneath the jargon a lot of business advice is actually fairly reasonable. What’s more, in a lot of cases it almost doesn’t matter what it is. What matters is that you have some corporate managers who are at sea and don’t know what to do, and they just need someone to provide them with some structure for changing things and moving forward. Not every structure will work, but I think you might be surprised by how many different ones do. What really matters is simply deciding on something and then getting a move on. A charismatic and self-confident CEO is supposed to provide this kind of leadership, but lacking that a little bit of witch doctory business process consulting can often help the process along.