The recent hubbub over the Chamber of Commerce taking money from foreign sources may be a little overblown, but at least it’s serving to shine a spotlight on an issue 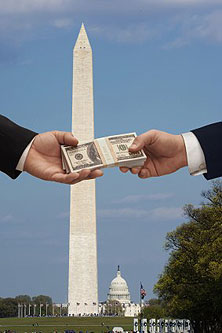 that really is important: the growing tidal wave of anonymous cash that funds American elections. The New York Times reports:

The American Future Fund, organized under a tax code provision that lets donors remain anonymous, is one of dozens of groups awash in money from hidden sources and spending it at an unprecedented rate, largely on behalf of Republicans. The breadth and impact of these privately financed groups have made them, and the mystery of their backers, a campaign issue in their own right.

….The surge of anonymous money is the latest development in corporate America’s efforts to influence the agenda in Washington, following rules enacted several years ago banning large, unregulated gifts to political parties….Now, as new laws and a major Supreme Court decision have removed barriers to corporate giving, Republican operatives have embraced the use of nonprofit issue groups that can keep donors’ identities secret.

….The U.S. Chamber of Commerce, which does not identify its corporate members, spent $10 million over the last week on advertisements, mostly against Democrats, records show. The chamber will most likely meet its fund-raising goal of $75 million, more than double what it spent on the 2008 campaign, Republican operatives say.

Democrats tried to bring this tsunami of interest group spending into the light by passing the DISCLOSE Act earlier this year, but the results were unsurprising. It got a grand total of two Republican votes in the House and zero Republican votes in the Senate, and ended up being filibustered to death. Corporate special interests prefer to work in the shadows, and the GOP is happy to oblige their preferences.

The bulk of the Times story is about the American Future Fund, which, upon investigation, turns out to have been started by a wealthy ethanol producer. This is probably pretty typical. A lot of the donors to these anonymous funds are probably just the usual rich folks who have given money to Republican campaigns in the past (“reliable Republican contributors who helped elect George W. Bush and support Swift Boat Veterans for Truth” in the Times’ words), but quite a few others are newbies with an agenda who don’t want their customers or anyone else to know that they’re taking partisan stands:

When [Karl] Rove and Ed Gillespie, the former Republican chairman, began their efforts last spring, they first helped set up a group called American Crossroads under a tax-code provision that requires the disclosure of donors. It took in several seven-figure contributions from high-profile donors, including Trevor Rees-Jones, president and chief executive of Chief Oil and Gas, and Robert Rowling, chief executive of TRT Holdings.

Then in June, Mr. Rove and Mr. Gillespie helped organize Crossroads GPS under the provision that allows donors to give anonymously. A Republican operative who speaks frequently with Mr. Rove said the public donations, revealed over the summer, were used as “a way to energize others to give large amounts anonymously.”

The operative added, “It has worked like a charm.”

I’ll bet it did. The vast sums of money spent by corporate interests on American elections is bad enough, but vast sums of secret money is far worse. This is not a healthy develpment in a supposedly open democracy.