I guess I shouldn’t care too much about stuff like this, but it bugs me when I get egregiously misquoted. Here is Tevi Troy in the Wall Street Journal today writing about the political disaster of healthcare reform:

Obama told wavering Democrats [that HCR] would suddenly become acceptable or even popular with the American people once it was passed. As Mother Jones’s Kevin Drum put it in March, “once people get a taste of universal healthcare, they like what they see and they don’t stop until the job is finished.”….Alas for Obama and Drum [], it turned out that the more people tasted it, the less they liked it.

And here’s what I actually wrote, in response to a question from Charles Pierce about why I thought passage of PPACA would lead to bigger and better reform down the road:

What’s the argument for longer term progress? This isn’t quite as black and white, but the historical evidence is pretty clear. Look at virtually every other advanced economy in the world. They started off with small programs and grew them over time. Germany spent over a century getting to universal healthcare. France started after World War II and didn’t finish until 1999. In Canada, national healthcare started in Saskatchewan in 1946, spread to the other provinces over the next couple of decades, and became Medicare in 1984. The trend here is pretty obvious: once people get a taste of universal healthcare, they like what they see and they don’t stop until the job is finished.

Obviously I was talking about long-term public acceptance of national healthcare after it starts getting implemented, not public reaction during a midterm 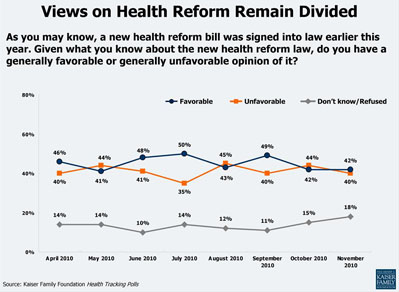 election six months after passage. I might, of course, turn out to be wrong about even that, but I said what I said, not what Troy pretended I said.

But hey — there’s more to this than just personal pique. There are also facts, which Troy cherry picks with abandon. I don’t know whether healthcare reform was really responsible for one-third of the 63-seat loss that Democrats suffered in November, as Troy says, but I do know in general terms how public opinion toward healthcare reform has trended during the year. Kaiser has been sampling it monthly and you can see the results on the right. In April, right after PPACA passed, it was viewed favorably by a 45%-40% margin. In November, that had changed to 42%-40%. And, as we all know, attitudes toward most of the specific provisions of PPACA remain even more strongly favorable. That’s not really evidence of a massive turnaround in public opinon.

Other surveys show other things, but in general healthcare reform polls favorably among Democrats and slightly favorably among independents; more favorably among the working age population than the elderly (probably due to the tsunami of Medicare demagoguing during the campaign); and modest majorities favor giving the bill a chance rather than repealing it. And, as always, the individual mandate polls badly.

In other words, the jury is still out on the political impact of healthcare reform. I’d say Democrats made a mistake by delaying implementation of most of it until 2014, and I’d also say (obviously) that Republicans are going to take a stab at repealing/defunding parts of it next year. There’s no telling how that’s going to play out. In the long term, though, if PPACA survives I’ll stick to my prediction: once it’s real and people start benefiting from it, it will become popular and the public will want it expanded. I’ll check back in 2020 to see how my crystal ball panned out.