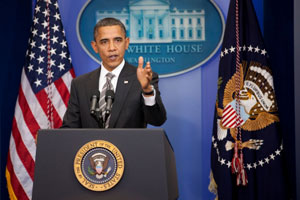 Damn. I skipped Obama’s press conference today, but I guess that was a big mistake. If my Twitter feed is anything to go by, progressive heads were exploding all over the intertubes. Here is Philip Klein’s summary:

Obama reserved some of his harshest criticism for liberals, who he scolded for being “sanctimonious” purists who wouldn’t be able to accomplish anything if they got their way. To drive home his point, he complained about the way liberals behaved during the health care debate, sounding like an unappreciated lover.

“Somehow this notion that we are willing to compromise too much reminds me of the debate we had during health care,” Obama said. “This is the public option debate all over again. So I pass a signature piece of legislation where I finally get health care for all Americans, something that Democrats have been fighting for for 100 years, but because there was a provision in there that they didn’t get that would have affected maybe a couple million people, even though we got health insurance for 30 million people, and the potential for lower premiums for 100 million people that somehow that was a sign of weakness and compromise. Now if that’s the standard against which we are measuring success or core principles, then let’s face it, we will never get anything done. People will have the satisfaction of having a purist position, and no victories for the American people. And we will be able to feel good about ourselves and sanctimonious about ourselves about how good our intentions are, how tough we are.”

At the same time, Obama also compared negotiating with Republicans to negotiating with hostage takers, and if I had more conservatives in my Twitter feed I’d probably be hearing a few winger heads exploding too.

Still, it’s obvious that Obama is more personally stung by criticism from the left than from the right. His outburst about “purist” liberals was considerably more impassioned than his rather clinical description of Republican “hostage takers.” In one sense, this isn’t surprising: you expect the opposition to show no mercy and that hardens you to it. You really don’t expect it from your putative allies. But in another sense it is surprising: even if Obama thinks his progressive critics are off base, he must know by now how they’re going to react to compromises like yesterday’s tax cut deal. So why was he apparently so unprepared for this? Why deliberately make things worse with his base during a press conference?

Answer 1: he just lost his temper a bit. It happens to everyone. Answer 2: it was all precisely calculated. He’s convinced that Democrats lost in November because of defections from independents, not liberals, so he’s trying to do everything he can to distance himself from the left and win back the center. My guess is that #1 accounts for 10% of his performance and #2 accounts for 90%. After all, we’ve seen this movie before in 1994.

Anyway, here’s a few predictions. (1) Purist liberals better get used to rhetoric like this. I think we’re going to see more of it. (2) Even so, everyone needs to give up on the idea of Obama being challenged by anyone substantial in the 2012 primary. Even Democrats aren’t that suicidal. (3) Hated or not, Obama’s tax deal is fairly good for the economy and it quite likely cements his reelection chances. If GDP growth is even in the neighborhood of 3% a year from now, I don’t think he’s beatable. (4) Looking at American politics from a 100,000-foot level, conservatives have won. Programmatic liberalism is essentially dead for a good long time, and small bore stuff is probably the best we can hope for over the next 10-20 years — though social liberalism will continue to make steady advances. I reserve judgment on whose fault that is.

POSTSCRIPT: Several people think #4 could use a wee bit of further explanation. Agreed! The short explanation is here. The longer version you’ll have to wait a while for. It’s coming in a couple of months or so. (Print lead times are a bitch…..)