Paul Krugman looks at Mark Zandi’s estimate of the impact of the Obama tax deal and comes away worried:

Look at the Zandi estimates: they show a boost to the economy in 2011, which is then given back in 2012. So growth is actually slower in 2012 than it would be without the deal. Now, what we know from lots of political economy research — Larry Bartels is my guru on this — is that presidential elections depend, not on the state of the economy, but on whether things are getting better or worse in the year or so before the election….Put these two observations together — and what you get is that the tax-cut deal makes Obama’s reelection less likely. Let me repeat: the tax cut deal makes Obama less likely to win in 2012.

Maybe. But keep in mind a couple of things. First, Zandi’s forecast is a comparison to his previous baseline, which included some of the tax cuts in the compromise plan. But the real baseline for comparison is no deal at all, and the forecast for 2012 is almost certainly better than that. Second, Zandi’s numbers are for full years. But any stimulus that goes through December 2011 will continue to have an effect for a few months after that, so it’s probably not until the middle of 2012 that you start to see a little bit of softness. By then it’s most likely too late to have much of an effect on the election.

Take a look at the excerpt from Zandi’s chart that I’ve posted below. Which numbers would you rather run on? Taken as a whole, the Obama tax deal numbers (“Combined Proposals”) look better to me than the baseline numbers, and a lot better than the “no deal at all” numbers. After all, letting the economy stagnate and unemployment remain high for yet another year could be a death blow to Obama’s standing before 2012 even starts — as would a second recession, which this deal makes much less likely. And even under the compromise deal, Zandi shows the economy continuing to improve in 2012. It’s a better deal for the country and a better deal for Obama. 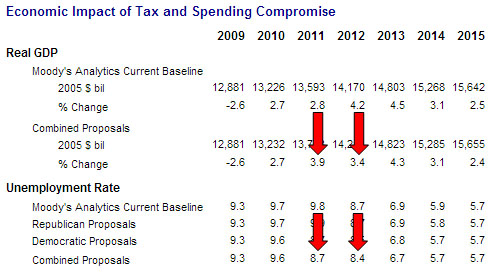