On Tuesday President Obama said we were entering “our generation’s Sputnik moment”:

Half a century ago, when the Soviets beat us into space with the launch of a satellite called Sputnik, we had no idea how we would beat them to the moon. The science wasn’t even there yet. NASA didn’t exist. But after investing in better research and education, we didn’t just surpass the Soviets; we unleashed a wave of innovation that created new industries and millions of new jobs.

This is only half right. It’s true that after the launch of Sputnik science and math education became an American obsession, but that’s not what got us to the moon. The scientists and engineers who eventually built the Apollo rockets weren’t teenagers, after all. They were grown men and women who’d been educated in the 40s and 50s. The post-Sputnik push for better technical education may or may not have paid off—remember the 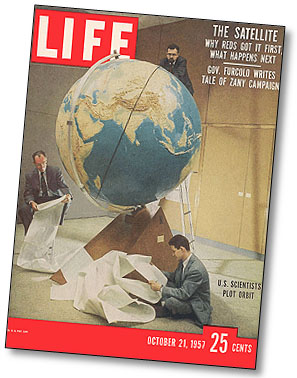 New Math?—but if it did, it paid off two decades later in the personal computer revolution of the 80s.

So how did we unleash a “wave of innovation that created new industries and millions of new jobs”? Obama only touched on that in his speech, but part the answer is: big government. As Fred Kaplan reminds us, when Texas Instruments introduced a newfangled invention called the microchip in 1959, nobody in the private sector had any use for it:

However, these tiny chips would be needed to power the guidance systems in the Minuteman’s nose cone—and in the coming Apollo program’s space capsule. It was the Pentagon and NASA that bought the first microchips. The demand allowed for economies of scale, driving down costs enough so that private companies started building products that relied on chips. This created further economies of scale. And so came the inventions of the pocket calculator, smaller and faster computers, and, decades later, just about everything that we use in daily life.

The microchip would have found a market eventually even without NASA, but it might have taken years longer. And this same story goes beyond just integrated circuits. The first computer, ENIAC, was originally designed for the United States Army’s Ballistic Research Laboratory. The internet was originally funded by the Pentagon’s Advanced Research Projects Agency—which had been created in the wake of Sputnik—and was based on packet switching technology invented by a professor at a public university. And today, rocket technology itself, originally designed and funded by the federal government, is starting to become a thriving private business as well.

It was the private sector that turned these inventions into multi-billion dollar businesses, but it was government that provided either the basic research, the initial market, or both. Acknowledging this isn’t an endorsement of socialism or tyranny or government run amok. It’s an acknowledgment of the reality of progress in the modern era. Obama was right to focus our attention on education, technology, and infrastructure in his State of the Union address, because that’s the seed corn that will provide long-term productivity growth for America and the world. But with apologies to Bill Clinton, if we’re really serious about out-innovating, out-educating, and out-building, this means accepting that the era of big government is far from over. When it comes to basic R&D and the infrastructure to exploit it, it’s only just begun.