Here is Robert Barro in the Wall Street Journal today making the case for anti-union policies:

There is evidence that right-to-work laws—or, more broadly, the pro-business policies offered by right-to-work states—matter for economic growth. In research published in 2000, economist Thomas Holmes of the University of Minnesota compared counties close to the border between states with and without right-to-work laws (thereby holding constant an array of factors related to geography and climate). He found that the cumulative growth of employment in manufacturing (the traditional area of union strength prior to the rise of public-employee unions) 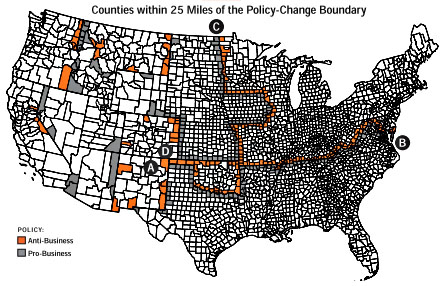 It’s true that Holmes wrote this paper. You can read it here if you like, or you can read a shorter, more accessible version here. In a technical sense, it’s an interesting bit of research. As Holmes says, “In state capitals throughout the country, proponents of pro-business policies routinely claim that state policies are an important determinant of business location. But this claim is open to debate. While there has been no shortage studies on the issue, there is a lack of consensus.”

Well, guess what? Holmes concluded that if moving a few miles across a state border allows a manufacturing business to reside in a right-to-work state with low taxes, no unions, and lax environmental policies, lots of manufacturing businesses will jump at the chance. It’s good to see some rigorous confirmation of this, I suppose, but let’s face it: It’s hardly a surprise, is it? It would be pretty shocking if it weren’t true.

Still, does this say anything about the effect of unions on economic growth, as Barro implies? No. Not a single thing. All it says is that businesses prefer locating in states where costs are low and rules are lax — something I think we all knew already. Of course that’s what businesses prefer. But it says literally nothing at all about whether the United States as a whole would have higher or lower growth if every state either did or didn’t have right-to-work laws. Implying otherwise is a clever debating technique, but that’s about all it is.

UPDATE: Ed Kilgore has more on this in the New Republic today:

Students of economic development will recognize [this] as the “smokestack-chasing” model of growth adopted by desperate developing countries around the world….And students of American economic history will recognize it as the “Moonlight and Magnolias” model of development, which is native to the Deep South…..This was the default model of economic growth in Southern states for decades—as the capital-starved, low-wage region concluded that the way it could compete economically with other states was to emphasize its comparative advantages: low costs, a large pool of relatively poor workers, “right to work” laws that discouraged unionization, and a small appetite for environmental or any other sort of regulation.

….The problem with this Southern theory of growth is that it won’t work: Economic development experts usually deride “Moonlight and Magnolias” approaches to job creation, noting that they track the outmoded first and second “waves” of basic economic development theory—which emphasized crude economic races to the bottom—as opposed to third and fourth “waves” that focus on worker skills, quality of life, public-private partnerships, innovation, and sustainability. If Wisconsin and other states—not to mention the country as a whole—end up adopting these atavistic economic ideals, they will simply begin to resemble the dysfunctional Old South societies that spawned them in the first place.

So what is at stake in Wisconsin, and across the country, is not just the pay and benefits of public employees, or their collective bargaining rights, or the specific programs facing the budgetary knife. We are contesting whether Americans who are not “job creators,” by virtue of wealth, should be considered anything more than cannon fodder in an endless war between states—and countries—over who can attract the most capital by slashing the most regulations. In this sense, standing up to Scott Walker is a truly worthy fight.

As they say, read the whole thing.