American conservatives have gone so far off the rails about the apocalyptic danger of the Muslim Brotherhood taking over in Egypt that it’s tempting for liberals to go too far in the other direction. So when I read Robert Dreyfuss’s piece about the Brotherhood today, I was all ready to criticize him for whitewashing some of the Brotherhood’s less savory aspects. But he didn’t. After a brief but extremely cogent summary of the Brotherhood’s history, he sums up with this:

By the 1990s, despite the off-again, on-again repression by Mubarak’s regime, the Brotherhood had completed what many observers say was a transformation. Step by step, its leadership renounced its violent past, engaged in politics, and tried to reinvent itself as a collection of community organizers who operated clinics and food 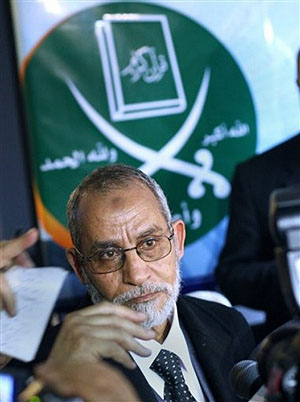 banks, building a network of Islamic banks and companies….Nathan Brown, a political science professor at George Washington University and an expert on political Islam, is optimistic that the Brotherhood has evolved from its fundamentalist roots: “Their agenda is to make Egypt better,” he told Salon recently….”They don’t want to necessarily completely convert Egypt into a traditional Islamic legal system. But if the Parliament’s going to pass a law, they want it to be consistent with Islamic law.”

….But it’s also fair to ask if Brown’s interpretation is too charitable. In 2007, the Brotherhood released a draft political program that included several very troubling proposals, including the idea that Egypt’s government be overseen by an unelected council of Islamic scholars who would measure the country’s laws against the Koran and sharia to make sure governance would “conform to Islamic law.” Since then, various Muslim Brotherhood officials have also made conflicting statements about anything from the role of women to the treatment of non-Muslim minorities.

In the end, there’s no getting around the fact that the Muslim Brotherhood is, if not an anachronism, a profoundly reactionary force. Its views on marriage, the family, homosexuality, and the like are distasteful to most Western minds and many Egyptian ones. And it harbors a strong current of overt anti-Semitism, along with a penchant for conspiracy theories. Despite Egypt’s drift toward a more conservative Islamic outlook since the 1970s—which paralleled similar trends across the Muslim world—the Egyptian people, especially the middle class, may in the end not be receptive to the Brotherhood’s message.

The whole piece is really very good, and well worth a few minutes of your time if you want to understand a bit more about the Brotherhood than you get from the headlines — both good and bad. The truth is that it’s hard to say how influential the group is likely to be in post-Mubarak Egypt, and it’s also genuinely hard to know exactly what direction they’ll pursue. But as Dreyfuss says, there are a couple of things we can say: “It is not Al Qaeda or the Taliban. It is a conservative, even ultra-orthodox Islamist group, but it’s irresponsible to compare it to the terrorist groups and armed insurgencies that have preoccupied American foreign policy since 2001….[But] it is certain to infuse the country with a stronger strain of anti-American and anti-Israel politics….It’s also likely to align Egypt more closely with other Islamist groups in the Arab world, especially Hamas.”

But either way, it can hardly be ignored.