A few years ago, after Cher and Bono dropped a couple of F-bombs on live TV, the FCC tightened up its obscenity rules and fined a bunch of broadcasters. The broadcasters fought back, and in 2009 the Supreme Court sent the case back to the 2nd Circuit Court, which overturned the FCC’s new rules. So what’s next? Stephanie Mencimer reports:

With the Second Circuit decision, broadcasters have been liberated to drop the F-bomb at will, and evangelical groups are seething. But what really ticks off indecency activists these days is that the case has landed squarely in the lap of the Obama administration, whose Justice Department is charged with appealing—or not—the decision to the Supreme Court on behalf of the FCC. To date, the Justice Department has twice asked for an extension for 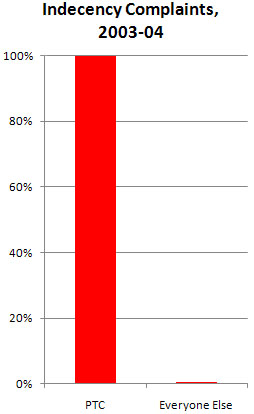 filing the appeal, which is now due April 21. Religious-right groups have accused Justice of dragging its feet to let the case simply die.

On Wednesday, Penny Nance, the CEO of Concerned Women for America, blasted the administration for not doing more to protect America’s children from dirty words….Meanwhile, the Parents Television Council, which brought the original complaint regarding the Golden Globes broadcast in 2003, sent out an urgent appeal to supporters asking them to pressure the administration to act.

Ah yes, the Parents Television Council. I remember them. Back in 2004, when this stuff was first in the news, Mediaweek obtained an estimate of where indecency complaints came from. Answer: the Parents Television Council. That’s it. In 2003-04, the PTC was responsible for over 99.8% of all indecency complaints to the FCC. I’ve illustrated this with the handy chart on the right.

As Stephanie points out, one reason the Justice Department might be hesitating is because the 2nd Circuit made it very clear that writing obscenity rules precise enough to be constitutional is really hard. But another reason might be that virtually no one except the PTC actually seems to care much about obscenity on television anymore. Welcome to the cable era, folks.