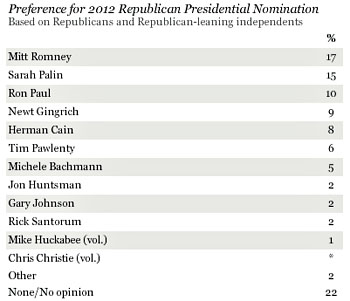 I can’t believe I’m writing a post about a Gallup poll on the GOP primary race in May 2011. I made a firm rule years ago not to engage in nonsense like this. But rules are meant to be broken, and today is a slow news day, so here it is.

Is there anything interesting here? Not really. Sarah Palin is in second place at 15%, but that’s a lot worse than it seems. She’s basically in Ron Paul territory: tons of name recognition and the benefit of a small band of dedicated fanatics. Everyone knows there’s a sizeable group of Palinistas out there who would vote for her even if she ran the entire race dressed up in a Mickey Mouse costume, and now Gallup has confirmed this. Big deal.

Newt Gingrich? He’s in big trouble. He’s been around forever, he has fantastic name recognition, he’s on TV constantly, and he still can’t pull more than 9%? He’s doomed.

Herman Cain?  There’s always a blowhard who knows nothing and just loudly spouts lots of “common sense” during the early debates in order to attract attention. This year that’s Cain. His bubble will burst soon enough.

As for the rest, Michele Bachmann is just a Sarah Palin wannabe, Huntsman is running for 2016, and Johnson and Santorum are vanity candidates. Basically, it still looks to me like a race between Romney and Pawlenty, with lots of spoilers to make things interesting. I just don’t see a path open for any of the others to win.