Robert Pear reports that hospitals are unhappy over new federal regulations that pay them based on the cost of care they provide to Medicare patients compared to other hospitals:

For the first time in its history, Medicare will soon track spending on millions of individual beneficiaries, reward hospitals that hold down costs and penalize those whose patients prove most expensive….Hospitals could be held accountable not only for the cost of the care they provide, but also for the cost of services performed by doctors and other health care providers in the 90 days after a Medicare patient leaves the hospital.

In related news, Aaron Carroll reports that physicians, who used to be rabidly opposed to national healthcare, are now substantially in favor of it:

Remember, this was support for federal legislation to establish National Health Insurance. That’s far more radical than the PPACA. And 59 percent of physicians supported it. That was an increase of 10 percent from what we found five years earlier, and it was statistically significant. More than 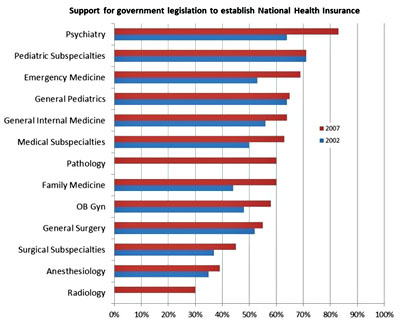 half the respondents from every medical specialty supported it, with the exception of surgical subspecialties, anesthesiologists and radiologists. That means support included a majority of general surgeons, medical subspecialists and obstetricians/gynecologists.

Aaron calls this a problem for the AMA, and I suppose it is. But I think it’s also a problem for hospitals: to a large extent, the interests of hospitals and physicians are not only diverging, but becoming actively opposed. In the past, physicians probably would have been as opposed to these new Medicare regs as hospital administrators, but I’ll bet that’s largely not the case anymore.

As an analogy, this strikes me as having mirror-image similarities to No Child Left Behind, another piece of legislation designed to force efficiency on a particular sector of the economy. At first, parents were largely in favor of NCLB while teachers and school administrators were largely opposed. But as time has passed and suburban schools have started to suffer from the law (either because they’re given failing grades or because inner city schools start competing effectively for the best teachers), the ground has shifted: parents and teachers now find themselves frequently in agreement that NCLB has gone further than they like. This provides a growing political coalition to change or water down the law.

In healthcare, it’s the same dynamic in the opposite direction: a political coalition is breaking up. Doctors and patients are starting to align one way, while hospitals and insurance companies are aligning in another way. The good news is that this makes it less likely that healthcare reform will be repealed. There just isn’t a united political coalition in favor of it.