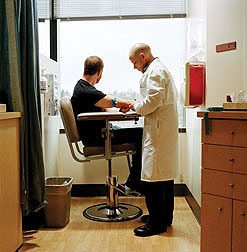 Ezra Klein responds to a Robin Hanson post suggesting that a lot of cancer screening is basically useless:

I think Hanson goes a bit far in the conclusions he draws, for reasons that some of his readers articulate in the comments. But “a bit far” isn’t the same as “wrong.” So if you’re anything like me, take a moment to think about how much you don’t want to believe that lung-cancer screenings or breast-cancer screenings may not actually work. And then think about trying to convince yourself they don’t work when your doctor is strongly urging you to get screened.

Actually, it’s even worse than that. A couple of months ago I got examined by a urologist and he recommended that I get a prostate biopsy to check out a lump he felt. So I made the appointment, and a few weeks ago I went in. But my second appointment was with a different doctor who wanted to check things out for himself. He proceeded to do an extremely thorough DRE1 and concluded that most likely my lump was just a bit of calcification. But he was ready to do the biopsy if I wanted it. Did I?

Well, here’s the thing. Even though my PSA test had been negative and I have no family history of cancer whatsoever; even though a prostate biopsy is a fairly unpleasant experience; even though prostate biopsies also have unpleasant lingering side effects; even though I’m philosophically opposed to overuse of medical tests; and even though I had a doctor standing right there telling me I probably didn’t need the test —

Even still, I almost went ahead and had him do it anyway. I mean, I was right there. It would only take ten minutes. Better safe than sorry, right?

Basically, everything you can think of was in place to turn down this test. But I almost didn’t. If even one little thing had suggested I should do it — maybe because the test was quick and painless, or perhaps because I had an uncle who had once had prostate cancer — I would have done it. And if that second doctor had told me to do it, regardless of whether it was in strong terms or not? Then I wouldn’t even have hesitated for a moment.

So that’s what we’re up against.

1DRE = digital rectal examination, and yes, this is exactly what you think it is.