Adam Ozimek on our unwillingness to truly reconsider beliefs that are integral to our self identity:

Think about beliefs that you hold and imagine yourself changing your mind. Literally imagine waking up tomorrow with a changed mind and imagine how you would or wouldn’t discuss changing your mind with people you know. Feelings will be strong for beliefs that are important to our identities or that we value for some signaling purpose, like signaling affiliation with some group. Can you actually imagine yourself with these changed beliefs, or is it unthinkable?

….Conservatives, could you imagine becoming someone believes that higher taxes and unemployment insurance don’t hurt economic growth or employment? Liberals can you imagine becoming someone who believes that that minimum wages decrease employment and fiscal stimulus doesn’t work? If the answer is no, you should think about whether it’s because holding such a belief would conflict with your identity or affiliations.

Maybe these are just bad examples, but neither one of them would cause me much angst if I had to change my mind about them. The minimum wage debate has always been balanced on a knife point, with basic theory suggesting that an increase will hurt employment but more detailed considerations suggesting there are small countervailing effects. It’s hard to imagine the evidence pointing to a large effect in either direction, but if it did, I wouldn’t have a lot of trouble endorsing some alternate way of helping low-income workers.1 Likewise, I didn’t endorse the 2009 stimulus because I wanted to spend all that money, I endorsed it because I thought it was the best short-term way to boost an economy 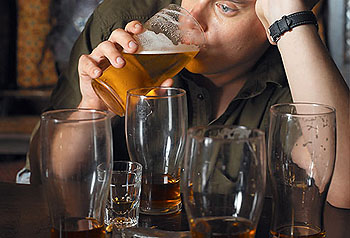 in big trouble. If there were indisputably a better way, I’d probably endorse that instead. (Though, as with all things, there are issues of fairness and equity that come into play too, not just pure economic considerations.)

I suppose a better example might be beliefs about taxes in general. There’s an obvious tension between economic efficiency, which suggests that consumption taxes are best, and liberal attitudes toward social justice, which motivate a desire for a fair amount of progressivity. The more evidence there is that high income taxes on the rich are bad for economic growth, the bigger the tension. Luckily for me, that evidence is still fairly slim. But what if it became stronger? It’s always possible to dream up progressive consumption taxes, but there are limits to what you can do with those. So there’s at least the possibility of a fair amount of cognitive dissonance here.

So…..I dunno. I guess a lot of this depends not just on how liberal or conservative you are, but on how inherently pragmatic you tend to be. I have pretty concrete feelings about social justice, but I also have pretty concrete feelings about wanting policies that work well and produce minimal friction. So far this hasn’t driven me to drink, but I guess there’s no telling about tomorrow, is there?

1Just generally, I’ve always been a fan of lots of little initiatives to help the poor rather than a few big ones. This is one of the reasons why. If you put all your eggs in one basket, and that basket turns out to be problematic, you’re screwed. If you have lots of little baskets, it’s not too wrenching to get rid of one and simply increase the others a little bit.