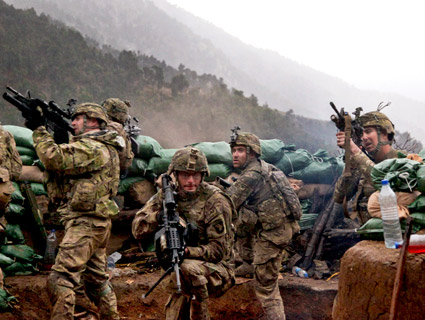 President Obama will be at Ft. Drum on Thursday to announce his plan to reduce our military presence in Afghanistan. Apparently, though, there’s not much chance of doing anything more than pulling out the 30,000 troops that were added to Afghanistan in 2010. The real discussion is only over the exact pace of withdrawal for those 30,000:

Administration officials said Mr. Obama would most likely pull out the entire 30,000 troops by the end of 2012. What is still not known is how soon and how fast, though as the administration’s deliberations wind down, the outlines of the main proposals are becoming clearer.

Some senior White House officials advocate a plan under which 15,000 troops would return by the end of this year and the other 15,000 by the end of 2012….Vice President Joseph R. Biden Jr., who has long pushed for the United States to curtail its military engagement in Afghanistan, favors a plan under which all 30,000 troops would be pulled out within 12 months….Pentagon and military officials [prefer] an initial reduction this year of about 5,000 troops — the size of a brigade — followed by 5,000 over the winter, when fighting recedes. The final 20,000 troops could remain into the next autumn, through the 2012 fighting season. 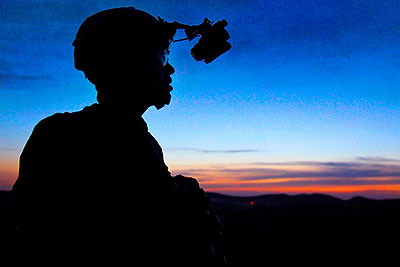 In the New York Times a couple of days ago, David Sanger wrote that Obama “has scaled back, time and again, Washington’s goals in a country that the British, the Soviets and ultimately the Americans tried, and failed, to change.” No kidding. Nation building is just a dim memory, we’re negotiating a power-sharing arrangement with the Taliban instead of trying to eliminate them, and our relationship with neighboring Pakistan is as dim as it’s been for the past decade. What’s more, the president of Afghanistan, Hamid Karzai, has become even more hostile and mercurial than ever, lashing out at NATO a few days ago with this broadside:

“You remember a few years ago I was saying thank you to the foreigners for their help; every minute we were thanking them,” he said. “Now I have stopped saying that, except when Spanta forced me to say thank you,” referring to his national security adviser, Rangin Spanta, who was present. “They’re here for their own purposes, for their own goals, and they’re using our soil for that,” Mr. Karzai said.

Former Afghan ambassador Karl Eikenberry, as Spencer Ackerman pungently put it, basically told Karzai the next day to “shut the fuck up,” and it’s hardly any wonder. It’s dangerous enough being deployed in Afghanistan already without having the local government essentially declare open season on you. But that’s what Karzai does every time he unleashes one of these verbal cannonades.

I honestly don’t know what our mission is in Afghanistan any more. It’s a base for continued drone attacks against al-Qaeda strongholds in Pakistan, but our own intelligence officials have estimated that there are no more than a couple of hundred al-Qaeda members left there. It hardly seems feasible that we’re ever going to get al-Qaeda presence in the AfPak border region down to zero, so the only real question left is whether it’s worth hundreds of American lives and tens of billions of American dollars every year to try to reduce that number from 200 to 100, or from 100 to 50.

We really don’t seem to be doing anything else useful there, the host government speaks out against us routinely, and Afghanistan continues to be a festering sore with no end in sight. So why is it that the only thing we’re arguing about is whether a few thousand troops will come home in February of next year instead of October? Why aren’t we arguing about whether we ought to be in Afghanistan at all?