The NLRB, protector of management rights when Republicans are in charge and protector of labor rights when Democrats are in charge, announced today that it plans to change the rules governing union recognition elections in order to “curb unnecessary litigation, streamline procedures before and after elections, and enable the use of electronic communications, such as requiring employers to give union organizers access to electronic files containing workers’ addresses and emails.” Sounds boring. So why should you care? I’ll let Peter Kirsanow, an avowed labor-phobe, explain:

In a nutshell, the NLRB’s proposed rules would implement “quickie elections,” a process that would allow unions to organize a workplace as easily as they could have had the Employee Free Choice Act (also known as “card check”) passed.

This is a very big deal….Right now, initial elections normally are conducted within 38–40 days of the filing of a petition by the union….That’s not much time for the employer to get his message out. Indeed, in 2009 and 2010 unions won approximately 68 percent of elections (this does not include the number of petitions withdrawn by unions). Yet the “quickie election” rules proposed by the NLRB will shorten the time frame to a mere 10–20 days. Make absolutely no mistake: That’s not enough time for even the largest and most sophisticated employers to counter what the union has been telling employees while organizing them for the last 6–8 months. The union win rate will far exceed 68 percent. In fact, it’s likely that many employers will choose to not even go through the expense of an election that he’s sure to lose, but will simply voluntarily recognize the union upon a showing of authorization cards.

Sounds good to me! And don’t get too excited about that two-thirds rate of union victories, either. It’s true that in 2009 unions won 66% of all NLRB elections compared to 51% in 1997, but that’s 66% of 1,304 elections compared to 51% of 3,261 elections. Contra Kirsanow, organizing a new workplace has gotten so hard in recent years thanks to corporate-friendly NLRB rule changes and increasingly aggressive union avoidance campaigns, that unions simply don’t bother waging all that many recognition elections anymore. They 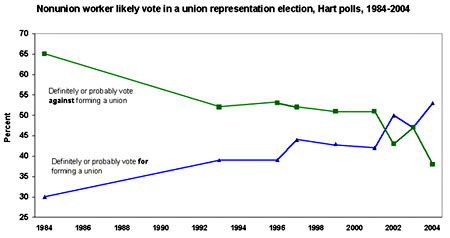 know that most of them are hopeless. The result is that the net number of election wins has dropped nearly in half in just the last decade alone.

That’s not good enough for Kirsanow and his allies, of course, who would like unions to disappear completely. But among workers themselves, the anti-union skepticism of the 70s and 80s has mostly disappeared in the face of stagnant wages and skyrocketing executive pay. Survey research a few years ago by Harvard’s Richard Freeman suggests that “if workers were provided the union representation they desired in 2005, then the unionization rate would be about 58%” — almost eight times higher than the actual private sector rate of 7.4%. The fact that so many workers would welcome union representation but don’t have it is compelling evidence that far from being unfair to management, the current legal regime for union elections is tilted dramatically in their favor. For workers, rule changes that slightly reduced that tilt and once again gave unions a fighting chance to organize workplaces would be a welcome change.