What really happened at Wednesday’s debt ceiling talks? It’s hard to say for sure, but apparently Eric Cantor repeatedly proposed some kind of short-term extension of the debt ceiling that President Obama had already said he wouldn’t support, and then interrupted to propose it yet again as Obama was wrapping up the meeting. Depending on who you listen to, Obama either “stormed out,” or left “angrily,” or 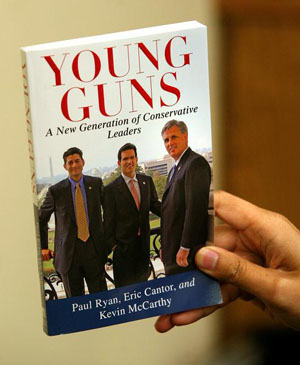 left “abruptly,” or simply left after telling Cantor they’d meet again tomorrow. One way or another, though, it looks like Obama finally got fed up with Cantor’s antics and warned him not to try calling his bluff. Joe Klein provides narration:

David Rogers over at Politico, who has been doing this — extremely well — for about as long as I have, has word that the President of the United States monstered down on Representative Eric Cantor in Wednesday’s deficit ceiling squabble. This is so refreshing on so many levels. Cantor has been using this crisis to undermine his leader John Boehner, by playing the Tea Party/Grover Norquist recalcitrance card. The boy badly needed someone to get up in his face and Barack Obama, of all people, apparently did, telling Cantor, in no uncertain terms, that he’d veto any short term deficit ceiling fix or, indeed, any plan that did not include revenue increases. Then Obama walked out, or the meeting ended, depending on whom you talk to.

So what we have now is the Republican party in, yes, disarray — a word used to describe Democrats almost exclusively, back in the day before the crazies took over the GOP store. You have Cantor and the House Teasies opposing any revenue increases, including a tax loophole closing plan that Ronald Reagan and Edmund Burke would have smiled upon. You have Boehner, struck dumb apparently, after his attempt at bipartisan statesmanship with the President was greeted by tossed shoes and catcalls from the Teasies. You have Mitch McConnell, well, I’m speechless about Mitch McConnell….

Republicans in disarray! And apparently even Lindsey Graham agrees. Here he is admitting to reporters that Republicans have been playing games all along:

Republicans now seem to be a hair’s breadth away from outright panic. Graham is right: at this point, no matter how desperately they try to pretend that it’s Obama standing in the way of a deal (and that’s clearly the conservative talking point of the day), it’s simply too obvious that it’s Republicans who are unwilling to say yes. Obama is almost embarrassingly eager for a deal, but they won’t agree to send him a clean debt ceiling increase, they won’t agree to a grand bargain, they won’t agree to a medium-sized bargain, and they won’t agree to revenue increases even in the form of closing virtually indefensible loopholes on hedge fund moguls and other assorted members of the millionaire class. Hell, a sizeable chunk of the GOP’s tea party faction actively thinks that default would be a great thing. They’re practically slavering over the possibility while their leaders watch slack-jawed, wondering just how you explain to these guys that, yes, pressing that red button over there would be really, really bad.

The tea party was pretty useful to the GOP leadership for a while. But now it’s gone from being a handy campaign tailwind to a Force 5 hurricane on a path to destroy the country, and they don’t know what to do about it. Under other circumstances it might be fun to watch them all get their comeuppance over this, but not if it means turning America into a banana republic along the way. They better figure out what to do with their problem children, and they better figure it out fast.