I know I’m beating a dead horse here, but this morning I opened my LA Times and found this:

Wall Street has tried to ignore the threat posed by Washington failing to raise the debt ceiling. No more…..Without a deal, the most feared scenario is that the U.S. will miss payments on its bonds and 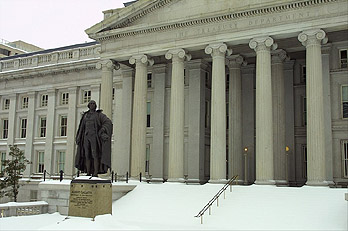 default — which financial experts say would be disastrous. While still considered unlikely, the prospect is popping up more in conversations.

I just don’t get this. Short of a meteor strike or an alien invasion, there is zero chance that the United States will miss any bond payments. Let me repeat that: zero. Bond payments over the next few months total about $50 billion or so and can be made easily regardless of what Congress does. Other programs may suffer, but treasury bills will continue to be solid gold. Based on current bond yields, the market clearly understands this, and surely “Wall Street” understands it too.

So what are they really afraid of? Continuing directly:

The more likely scenario that investors are preparing for is that a temporary deal is struck to lift the debt ceiling. But such a makeshift plan is unlikely to allow the U.S. to maintain its AAA grade with bond rating companies. Citigroup analysts say the odds are 50-50 that the U.S. will be demoted to an AA rating for the first time ever.

Such a downgrade could lead to a temporary market panic. In the longer term it could push interest rates up for everyone from bankers down to ordinary people taking out car loans, and weaken the dollar’s position as the world’s reserve currency.

It makes more sense to be afraid of this, but does it make any sense for the rating agencies to be threatening a downgrade in the first place? I still don’t see it. Their concern should solely be over the likelihood of bonds being defaulted, and that likelihood remains essentially zero. As bad as the debt ceiling stalemate is, it flatly does nothing to imperil the possibility of the United States making good on its debt.

There’s something deeply weird going on here. Wall Street is allegedly worried over a default that’s not going to happen, or else it’s worried about the fiscal opinions of some rating agency analysts who don’t know anything more about the financial future of the United States than anyone else. And those opinions don’t even make much sense. The United States remains highly productive; the deficit of the past three years is completely justifiable; our long-term healthcare problems are exactly the same as every other advanced country in the world and exactly the same as they’ve been for years; and the current stalemate in Congress is — what? Six months old? They’re talking about a downgrade of 30-year sovereign debt from the safest, most powerful country in the world based on a political spat that’s been going on for less than a year?