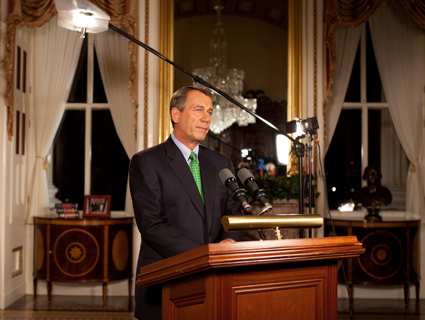 Rep. John Boehner (R-Ohio), the Speaker of the House, addresses the nation about the debt ceiling crisis on Monday, July 25.<a href="http://www.flickr.com/photos/speakerboehner/5979329260/in/photostream">Speaker Boehner</a>/Flickr

It’s no surprise that political partisans tend not to like each other. Generally, though—with obvious and famous exceptions aside—the level of personal hostility on Capitol Hill has usually been kept down to manageable levels.

Until now. To a degree rarely seen in the past, Republican policymaking lately seems to have been driven at least as much by pure political venom as it has by ideology or interest-group pressure. House Speaker John Boehner certainly gets this. When he was trying to whip his troops into line to vote for his debt ceiling bill on Wednesday, his pitch was simple: “President Obama hates it. Harry Reid hates it. Nancy Pelosi hates it. Why would Republicans want to be on the side of President Obama, Harry Reid, and Nancy Pelosi is beyond me.” That was enough for conservative firebrand Rep. Allen West (R-Fla.). Boehner’s plan wasn’t perfect, he said in a Facebook post, but “the fact Pelosi, Reid and Obama hate it doggone makes it perfect enough.”

And it’s not just the debt ceiling. Take cap-and-trade legislation to reduce carbon emissions. As recently as 2008, plenty of Republican leaders were for it. John McCain backed cap-and-trade, and so did Tim Pawlenty. Newt Gingrich even cut a commercial with Nancy Pelosi where he declared to the world that “our country must take action to address climate change.”

But then Democrats introduced an actual cap-and-trade bill, and in the blink of an eye it got tarred as “cap-and-tax” and opposition became practically a litmus test for movement conservatives. Republicans couldn’t run away fast enough. Gingrich’s recent attempt to disown his own words was almost poignant, while Pawlenty’s groveling has been all but cringe-inducing. “I just admitted it,” he said. “I don’t try to duck it, bob it, weave it, explain it away. I’m just telling you, I made a mistake.”

In recent months this has metastasized into all-out war as House Republicans have bombarded a pending appropriations bill with amendments to roll back environmental rules:

Although inserting policy changes into appropriations bills is a common strategy when government is divided as it is now, no one can remember such an aggressive use of the tactic against natural resources.…The unusual breadth of the attack, explained Rep. Mike Simpson (R-Idaho), is a measure of his party’s intense frustration over cumbersome environmental rules.

“Many of us think that the overregulation from EPA is at the heart of our stalled economy,” Mr. Simpson said, referring to the Environmental Protection Agency.

Simpson’s suggestion that the EPA is responsible for our parlous economic condition could hardly have been suggested seriously. It’s just filler, the kind of thing that gurgles up from the recesses of a politician’s mind because they have to say something when a reporter asks what’s going on. Grist writer David Roberts gets closer to the truth when he points out that Republicans are even going after a Bush-era regulation that prevents the Defense Department from using fossil fuels that are dirtier than petroleum. The catch? Even the Pentagon doesn’t want this rule repealed. “Repeal or exemption could hamper the department’s efforts to provide better energy options to our warfighters,” wrote Elizabeth King, assistant secretary of defense for legislative affairs.

No matter. Republicans want it repealed anyway. Why? Ideology is probably part of it, as is fealty to coal interests. But that’s not the whole story. Repealing it just because it’s something Democrats like seems to be part of it too. Welcome to the modern Republican Party.