This chart is from the New York Times, and shows in lovely, vibrant colors that George Bush was responsible for far more of our current deficit than Barack Obama has been. It’s pretty dramatic, and in any case, probably understates the 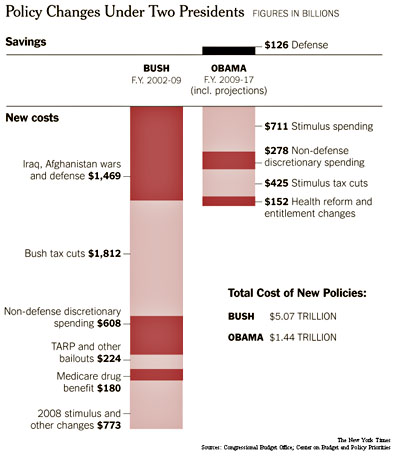 difference since the vast majority of Obama’s contributions were specifically designed to be temporary reactions to the recession. Take out temporary recession spending from both sides and the tally is something like $4,000 billion for Bush and $300 billion for Obama. So now you know the facts.

But, really, who cares? Republicans have never really cared about the deficit except as a partisan tool to use against Democratic presidents, and all the charts in the world aren’t going to change that. They’ll just keep pointing out that the 2011 deficit is bigger than anything Bush ran up — which is true, thanks to the recession he bequeathed to Obama — and then move on. It’s enough for a TV soundbite, and that’s all that matters. The Pete Petersons and Standard & Poor’s of the world will play along for their own reasons, and the nation’s editorial pages will mostly cheer them on. (And then, quite possibly in an editorial on the same page, wail about all the jobless and wonder why they’ve been forgotten.)

But while it’s pretty plain that Republican angst over the deficit is just a facade, I think Atrios isn’t quite right when he says that Republicans also don’t care about cutting spending. They do. In fact, that’s the political beauty of pretending to care about the deficit: it sounds fiscally responsible, and it provides cover to cut spending on social programs that Democrats care about. Not defense or, as Atrios says, Social Security or Medicare unless they can get bipartisan cover for it, but pretty much anything else that benefits the poor or the young or the sick. All in the name of getting our fiscal house in order and not becoming the next Greece. Hooray.