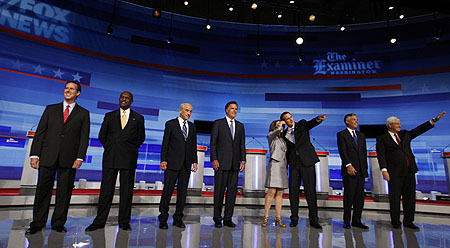 I thought tonight’s debate was much closer than the last one. I didn’t really see any clear winners or losers. Just in general, though:

Romney was fine, I guess. No mistakes, but also nothing that really helped him. Still the front-runner until someone knocks him off his perch. Something tells me I’m going to be saying that a lot.

Pawlenty continued to be a little soporific, though he didn’t make any big mistakes this time around. So in that sense it was an improvement over last time. But he still doesn’t know how to credibly sound tough. And that joke about mowing Mitt Romney’s lawn? Please. Frank Luntz apparently loved it, but I thought it seemed way too obviously prepped and staged. For that kind of thing to work, it has to sound spontaneous, and Pawlenty just doesn’t seem to have the ability to sound spontaneous.

Santorum was way too whiny. Quit complaining about how much camera time you get!

Jon Huntsman didn’t really distinguish himself, but also didn’t pander as much as the rest of the field. I still maintain that he’s running for 2016, not 1012.

Gingrich proved once again that he knows how to turn a phrase, but that’s about it. He reeled off some good applause lines, including his faux outrage over gotcha questions, but honestly, he still doesn’t look like he’s treating the whole thing seriously. At the very least he could try standing up straight instead of slouching rakishly over the lectern.

Ron Paul, Herman Cain: give it up guys.

Standard caveat: I’m obviously not the target audience for these folks, so it hardly matters what I thought about them. Still, what’s so striking about this group is that aside from Ron Paul there’s hardly any real daylight between them. The questioners tried mightily to provoke some arguments, and they did manage to get a few small ones going over relative minutiae, but for the most part they’re still just trying to out-tea party each other.

Nonstandard caveat: I had to go out to pick up a pizza partway through, so I didn’t see the whole thing. I might have missed the best zingers and most substantive discussions of the night, for all I know.

Next: Rick Perry shakes things up! And when he does, I guess I’m going to have to explain further why I’m so sure that he can’t win next year. Either that or I’ll have to change my mind. I’ll bet you can’t wait to see which way I go.