So what can President Obama do to show that he’s not a wimp? Jonathan Bernstein suggests the he ignore the “we’re technically not in recess because we’re holding pro-forma sessions every few days” ploy and just go ahead and make a few recess appointments anyway:

There’s nothing at all stopping Obama from calling this pro forma non-recess recess a farce, saying that for all practical purposes it’s really a recess (and after all, it certainly is in the sense that the Senate has no intention of working on nominations for the entire month), and appointing someone anyway….In my view, the president should start with a relatively uncontroversial pick — say, his commerce secretary appointee, John Bryson. And he should make it clear: 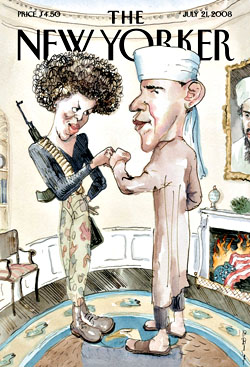 I’m all for this. Not because I care about Obama showing off how big his package is, but because I’m in favor of just about anything that stirs up a fight over the absurd impasse we’ve reached on presidential appointments. As far as I’m concerned, the constitution requires the Senate to act on presidential nominees in some kind of reasonable time and it requires a simple majority vote for confirmation. It’s not an optional thing. So bring it on.

More broadly, though, I think it’s worth pointing out that this business of displaying toughness is an asymmetric war. Opposition parties in Congress can do pretty much anything they want and pay no price as long as they keep public opinion under control. Presidents can fight back a bit, but frankly, there’s not that much they can do. No matter how mad he gets, Obama just doesn’t have a lot of leverage to hurt John Boehner in any serious way.

Unfortunately, the flip side is different because presidents actually want to accomplish stuff, not merely bring the other side to a halt. Think about Obama’s first two years in office. With the exception of a few weeks at the end of 2009, he never had 60 votes in the Senate. That meant that to get anything done he always needed at least two or three Republican votes. He didn’t get any of those votes for healthcare reform, but he did get them for the stimulus, for Lily Ledbetter, for Dodd-Frank, for DADT repeal, for START, and for several other bills. (Student loan reform got passed via reconciliation and didn’t need any Republican votes.)

So what would have happened if Obama had taken a confrontational, take-no-prisoners stand from the very beginning? One possibility is that the public would have swooned, Republicans would have been overwhelmed, and he would have gotten a lot more done. And I guess that’s possible. But what’s far more likely is that if he had turned into a partisan warrior then even the few moderate Republicans left in the Senate would have toed the party line and refused to support anything with Obama’s name on it. That’s what happens when you amp up the tribal lines.

How would that have worked out in the end? I guess there’s no telling. But if I had to bet, I’d say that Obama would have gotten a whole lot less done. David Corn provides the White House line on all this here, in a piece worth reading. I’d say that Obama has been more accommodating than he should have been, but the truth is that he just doesn’t have the luxury of lashing out. He’s got a country to run, after all.