Whenever you buy an asset — a house, say, or a share of stock or some other investment instrument — and then sell it later for more than you paid for it, the profit is a capital gain. And unlike you and me, whose income mostly comes from wages, a big part of the income of rich people comes from capital gains. Naturally, then, rich people are extremely interested in having low tax rates on capital gains.

However, since “rich people deserve to pay low tax rates” is not a very persuasive argument, the justification for low capital gains tax rates is usually couched in the language of “capital formation.” This is a concept that’s perfectly legitimate in theory but, in the hands of the Wall Street Journal editorial page, has been corrupted over the past couple of decades into an all-purpose excuse for low tax rates on pretty much everything related to the income of rich people. In fact, a pretty good rule of thumb these days is that any time you see the phrase “capital formation” in an op-ed page anywhere, you should ignore everything that comes after it. It’s just bollocks.

Still, it’s worth having some hard data about this too. In the context we’re using here, capital formation refers to capital used for investment purposes, so in its nickel version the argument for low capital gains rates is that it encourages capital to be invested. This is a good thing, and if it were true it would be a powerful argument for low taxes on capital gains. But it’s not. Jared Bernstein provides the chart below, which shows the growth of investment over time (blue line) and the capital gains tax rate (red line): 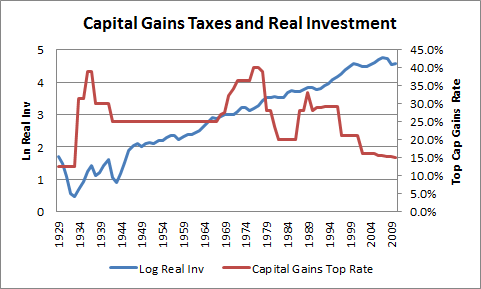 There’s pretty much no correlation at all. Investment increases over time at a steady rate regardless of what the capital gains tax rate is. Bernstein comments:

There are a few economic principles that we consistently get wrong in ways that do lasting damage to our economy and diminish our future. At the top of this list are arguments about large behavioral responses to changes in tax rates. I don’t think it’s zero, but I’ve simply never seen compelling evidence that tax increases significantly hurt growth, labor supply, jobs, wages, or that rate decreases provide much of a boost the other way. And when you factor in the benefits of the investment and services government provides—something the literature tends to ignore—the hyper-responsiveness arguments are even less compelling.

Yep. All taxes have deadweight losses, and all taxes affect incentives, but the bulk of the research suggests that the size of the incentives is pretty modest. It’s handy for rich people to pretend otherwise, and in particular to pretend that investment levels will skyrocket if capital gains tax rates are reduced, but the evidence for this is very slim. Still, it is a handy argument for rich people, and that’s why it will never die.

Personally, I’ve always been sympathetic to the argument that capital gains should be adjusted for inflation before they’re taxed. If you invest $100 and ten years later it’s become $150, it’s unfair to tax the full $50 if a chunk of that is merely the result of inflation and the real profit is smaller. But indexing for inflation is complex, and as a substitute it might make sense to simply set the capital gains tax rate a bit lower than the normal income tax rate. Aside from that small adjustment, however, keeping all tax rates at similar levels prevents a lot of useless and distortionary tax arbitrage, and is usually the best course unless there’s a really compelling reason for a difference. In the case of capital gains, there isn’t, regardless of how often the Journal editorial page tries to hoodwink us into believing differently.