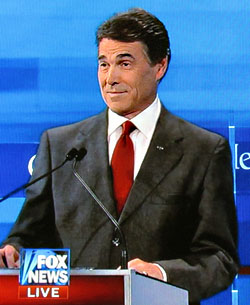 In one sense, the Republican debate tonight wasn’t too interesting: most of the candidates repeated pretty much the same talking points as before. But Perry really stuck to his talking points. He remains completely unable to say anything really substantive, and stumbles badly when he’s trying to dredge up a new talking point from the depths of his brain. I know that deep policy expertise isn’t his big selling point, but he’s really starting to sound like a schoolboy who memorized a few index cards ten minutes before show time, delivers them haltingly when the teacher calls on him, and then tries to joke and grin his way into a passing grade.

So what was interesting was listening to Frank Luntz’s focus group after the debate. There were a ton of defectors from Perry to Romney. I don’t know if this means anything, but if it does it means that even the Republican base may be getting a little weary of Perry’s audio-animatronic good ol’ boy schtick. Plus a lot of the focus groupers really bought in to Romney’s criticism of Perry’s policy of letting illegal immigrants pay in-state tuition at Texas universities, and they were really upset at Perry’s defense. They did not — not not not — appreciate his suggestion that anyone who disagreed with him about this was heartless. That’s the kind of thing they hear from liberals, and they’re sick of it.

Perry now has the base firmly upset with him over both immigration and the HPV vaccine; he was unable to really defend himself on either Social Security or the number of uninsured in Texas; and his lack of policy seriousness is starting to go beyond winsome and edging instead into not-ready-for-prime-time territory. So we’ll see. I keep thinking that Perry’s smugness and lack of depth is eventually going to wear thin even among the faithful, and maybe tonight was the night where that started to happen. Maybe.