I just finished reading The New Deal: A Modern History, by Michael Hiltzik, and I can’t recommend it highly enough. I’m a friend of Michael’s, so feel free to take this with a grain of salt if you want, but it’s really terrific, an energetically written and eminently readable history that makes all the right tradeoffs. At a little over 400 pages, you’re not going to get every last detail of the New Deal, but you’re going to get all 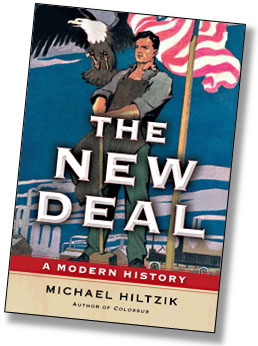 the high points, narrated with vigorous prose, a clear-sighted appreciation of just what motivated FDR and his allies, and a modern understanding of what they actually accomplished. And unlike the doorstop histories, you’ll finish it quickly enough to be left wishing for more.

And you’ll meet some new friends. All the usual New Deal architects are there — Raymond Moley, Frances Perkins, Harry Hopkins, and, always, the redoubtable Harold Ickes — but Hiltzik also spends more than the usual time on a few of its lesser known figures: Benjamin Cohen, the genius legislative drafter; General Hugh Johnson, the force of nature who ran the NRA for a year and probably destroyed it long before the Supreme Court did; George Warren, the eccentric Cornell economist responsible for FDR’s peculiar decision to tinker with the price of gold in 1933; Martin Dies, the red-baiting foe of the WPA whose “Dies Committee” would become famous as HUAC during the McCarthy era; and a variegated cast of other misfits and less familiar faces. Because of this a few things get short shrift — the labor movement comes most to mind here — but for the most part the omissions are modest. The big ticket items are all here.

Hiltzik also devotes a full chapter to the almost complete inability — or unwillingness — of the New Deal to help black Americans, the “most forgotten man,” in T. Arnold Hill’s words. With only narrow and fleeting exceptions, nearly every New Deal program was transformed, either in law or in practice, to insure that only whites would benefit from them. “The Tennessee Valley Authority might have the ability to raise an entire region out of near-medieval poverty,” Hiltzik writes, “but black Americans were not permitted to reside next to the white dam workers….Almost every federal settlement, work relief camp, and construction crew that accommodated blacks did so on a racially segregated ‘Jim Crow’ basis” — and this was nearly as true in the Northern states as in the Southern. This aspect of the New Deal has gotten more attention in recent years than it used to, but nonetheless deserves wider recognition. Hiltzik delivers that.

This is also a timely book. One of the most striking things that shines through Hiltzik’s narrative is the political similarity of the 30s to our current era. There’s the intense hatred of FDR among the affluent, with their insistence that unemployment remained high only because he was destroying business confidence and strangling corporations with excessive regulation. There’s the emergence of a lunatic right convinced that FDR was subverting the constitution and establishing socialism, ironically combined with a progressive left that became increasingly disillusioned with his centrism and political accommodation. There’s the modest size of the early New Deal stimulus, which was too small and too brief, animated as it was by a skepticism of Keynesian ideas even among much of the left. There are the racial underpinnings of much of the opposition to the New Deal, coming from Southern Democrats hypersensitive to anything that might undermine the authority and influence of white power. There’s the overriding folk belief in balanced budgets, which seemingly affected everyone from the president to the lowliest janitor. Sound familiar?

The Great Recession of 2008 was milder than it could have been because we learned so many lessons from the Great Depression of the 30s. But its continuing hold, and the possibility that we might yet fall into a second recession, is largely due to the lessons we haven’t learned. The New Deal teaches them to us all over again.