Ezra Klein writes today about a tension in Ron Suskind’s Confidence Men: Suskind apparently thinks Larry Summers is an asshole,1 but at the same time a close reading of the book suggests that Suskind actually takes Summers’ side on the merits of an awful lot of policy issues. So what’s up with that?

I’m reluctant to say anything specific since I haven’t read the book, but I do think this points to something that’s a pervasive, and apparently intractable, problem with this genre of book: it relies too much on blind quotes. And in the case of Confidence Men, an awful lot of the sources behind these quotes apparently don’t like Summers much.

I know, I know: this is hardly a blindingly original criticism. But it’s still a debilitating one, and you could see the same problem at work last year in, for example, Andrew Ross Sorkin’s Too Big To Fail. The problem, bluntly stated, is that the world of the West Wing, like the world of Wall Street, is a fantastic snake pit of backstabbing, score settling, blame avoiding, and self-aggrandizement. So whenever you read a narrative about anything, you absolutely need to know who it’s coming from. Often 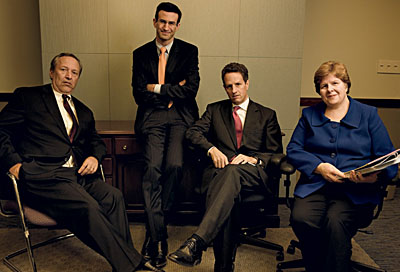 you can guess at this just by examining which side a particular narrative seems to take, but guessing is all you can do. The plain fact is that the third-person omniscient storytelling style very strongly encourages you to forget about all this.

Which is odd, of course, since books like this usually spend a ton of time talking about all the personality conflicts at work. And yet, the narrative itself acts as if these conflicts don’t matter. Form and content are at war, and in the end, form wins: the reader is encouraged to think of the narratives as truth, rather than as Tim Geithner’s side of the story or Christina Romer’s side of the story or Rahm Emanuel’s side of the story. And not to get all postmodern on y’all, but “truth” is a very, very bad way to think of this stuff. In narratives like this, it really is the case that everyone has their own truth, and unless you know that in your bones the story will never really make proper sense.

1Yes, yes, I know: big surprise. Is there anyone left on the planet who doesn’t think Larry Summers is an asshole?