Last week I blogged about a new paper suggesting that the European and the U.S. economies are more interconnected than most people think. The basic story had to do with credit conditions: Starting around 1999, European banks began to supply (or recycle) a lot of America’s credit, and this means that when European banks start deleveraging it’s likely to produce a severe credit contraction in the U.S. as well.

That conclusion was a little speculative, but you may recall that last week I also posted a chart showing that industrial orders had plunged 6.4% in the eurozone in September. Today, Tim Duy overlays U.S. industrial orders on the same chart and produces some sobering news:

Not a perfect match, but enough to suggest the idea of substantial decoupling looks like more myth than reality, especially in the face of a severe recession….Bottom Line: Don’t take US resilience for granted this time around — Europe is getting ugly, and it is far too late to prevent severe recession. The best policymakers can hope for at this point is too avoid a depression.

Correlation is not causation. But whatever the reason, it sure looks as if the U.S. and European economies really are linked closely in some fundamental ways — which shouldn’t be too surprising since Europe is our biggest trading partner and their banks are pretty tightly joined to the U.S. market. If Europe tumbles — and it sure looks likely that it will — we’re likely to tumble too. 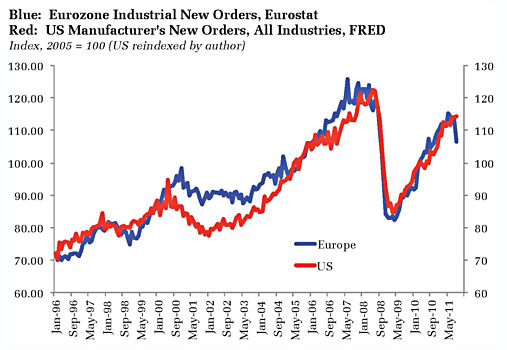