The details of what happened at Jon Corzine’s MF Global seem depressingly familiar. MFG borrowed a ton of money and then bought some European bonds that paid more than the interest on the loan. Profit! Of course, everything was hedged to within an inch of its life, so there was no risk of loss even if, say, Europe’s debt crisis spun out of control and their bond yields gapped out. It was, as usual, a riskless moneymaking machine.

But guess what? There’s no such thing as riskless. When European bonds began going south, and seemed likely to keep going south, lenders started getting nervous and demanded additional collateral. 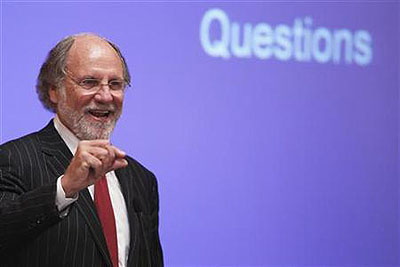 But MF Global was leveraged to its eyeballs and couldn’t come up with any. This led to the usual dispiriting death spiral we’ve gotten so accustomed to.

Most of the talk about MF Global right now is about whether this is another “Lehman moment.” Probably not. In any case, it seems to me more like another “Long Term Capital Management moment.” The details of the trades are different, of course, but the overall bets are similar, the leveraging is similar, the collateral calls are similar, and even the proximate causes of collapse are similar (Russia for LTCM, Europe for MF Global). Plus, just to put a cherry on top, there’s now a suggestion that MF Global might have been dipping into customer accounts to pay its bills. At least LTCM never did that.

So what are the lessons? All the usual ones that we pretend to learn every time this happens but never do. Extreme leverage is toxic. There are no riskless trades. Hedging is never perfect. Sovereign debt is just another kind of debt. That was the lesson of LTCM in 1998 and it was the lesson of 2008. The financial industry keeps saying that this time they’ve learned their lesson for sure, but guess what? They never do. They just can’t stay away from the Great Casino, and unfortunately, unlike some poor schlub who loses his savings account in Vegas and only has to face the wrath of his wife when he gets home, when Wall Street loses, it loses big enough to cause problems for the entire global financial system. And we all pay the price for that.

Thus the need for regulation. Not because Wall Street is full of evil people, but because it’s full of testosterone-fueled optimists who are convinced they can never lose. That’s fine as long as they do it with their own money. But when they do it with mountains of debt it’s not. The only question then is who’s going to collapse next and how much damage they’re going to leave in their wake, not whether anyone is going to collapse.

This may not be another Lehman moment. Not yet. But it does suggest that American exposure to Europe’s problems is greater than anyone wants to acknowledge. It all depends on how many more MF Globals are hiding in the woodwork.