Paul Krugman admits that it’s impossible to know if President Obama could have gotten a bigger stimulus bill through Congress than he did in 2009. But he still has a question:

One thing I wish apologists for the inadequate stimulus would acknowledge is that Obama and his officials never, at any point, suggested or conceded that they were settling for less than the economy probably needed. Instead, they always described themselves as being bold and forceful, applying the Powell Doctrine of overwhelming force to the economic crisis—even 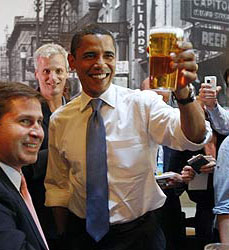 as they knew full well that friendly economists were tearing their hair out over the failure to do remotely enough.

Fine. I acknowledge it. But I’m pretty sure I know why this happened. Here it is:

Because this is the way that every political administration in human history has acted.

Obviously I’m exaggerating for effect. There are always exceptions, and I could even name a few off the top of my head. FDR routinely lauded the accomplishments of his administration but, because he considered the New Deal a multiyear package of measures, also routinely described these accomplishments as good starts, not finished products. “This law,” he said when he signed the Social Security Act, “represents a cornerstone in a structure which is being built but is by no means complete.”

But this is very much the exception, not the rule. Generally speaking, there’s just no mileage in politicians playing down their own accomplishments, and they know it. When they win passage of a bill, it’s a landmark in human history, it’s the product of thousands of people working together for the common good, it’s going to usher in a bright new future for all Americans. Etc. After all, if a president won’t brag on his own accomplishments, who will? And if voters aren’t regularly reminded of what a great job they’ve done, who’s going to vote for them?

In fact, this dynamic is probably even stronger now than usual, thanks to the scorched-earth era of partisanship we’re going through these days. When the opposition isn’t satisfied with merely opposing, but routinely froths at the mouth about your agenda clocking in just shy of the collected works of Satan, the only way to keep from being drowned out is to play up the gloriousness of your own accomplishments. It’s not pretty, but it’s reality.

So that’s that. But here’s a question right back at Krugman. Like him, I think the stimulus was too small, housing policy was inadequate, and banks were treated too gingerly. But even with all that granted, the way to judge a political leader isn’t by the standards of perfection, but by the standards of what human beings working in a messy political environment can accomplish. So here’s what I want to know: How did Obama perform compared to his peers? By “peer,” I mean the leader of a reasonably large country fighting the global economic mess. Here’s the basic list:

You can add or subtract to this list as you see fit, but I’m deliberately excluding small countries that simply don’t have much of a leadership role, as well as developing countries that didn’t get hit very hard by the Great Recession. So where would you put Obama on this list? I’d have a hard time putting him further down than #2, and frankly, I think you can even make a case for him being at #1. And if that’s the case, then our problem isn’t so much with Obama per se, it’s with the current state of the art in human collective action.

But maybe I’m being too kind. Anyone want to take a crack at making the case for putting Obama lower on this list?