I couldn’t rouse myself yesterday to comment on the allegations of “inappropriate behavior” that were lodged against Herman Cain a decade ago and have now come to light thanks to — well, thanks to some enterprising oppo shop, probably. 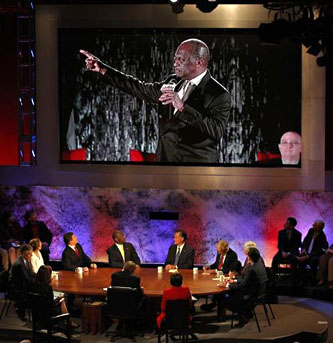 We really don’t know. In any case, today Jon Chait digs into my subconscious and explains to me why I didn’t care: it’s because I know perfectly well that Cain isn’t really running for president. His “campaign” is just a put-on:

Cain is executing a business plan. It’s an excellent plan. The plan involves Cain raising his profile as a conservative personality, which he can monetize through motivational speaking, book sales, talk shows, and other media. Cain’s selling point is that he’s a black conservative who can capitalize on the sense of white racial victimization that has mushroomed during the Obama era. Accordingly, Cain assures conservatives that they are not racist, as proven by their support for him. Indeed, it is the liberals who are racist, as evidenced by their opposition to Cain.

Herman Cain will not be our next president. However, conservatives have already convinced themselves — in defiance of both logic and common sense — that the charges against Cain emanated from some lefty organization terrified of the possibility that Cain might win the GOP nomination and run against President Obama. In fact, I think I can safely speak for the entire liberal community when I say that we’d barely be able to control our collective delight if Cain won the nomination. We love the idea of Cain winning the nomination. And if we had a bombshell like allegations of sexual misconduct? Believe you me, we’d keep said bombshell safely in our pockets until, oh, late August of 2012, let’s say, and then drop it on the press just before the Republican convention opens. That would be great!

Anyway, yes: Cain’s schtick is to sell books, maybe get himself a gig on Fox News, and raise his lecture fees. Among the true believers he appeals to, charges of misconduct are like manna from heaven, just more proof that white liberals are the real racists while they themselves, by sticking with their main, are the true avatars of racial tolerance in America.

Hell, maybe Cain himself leaked this stuff. Considering how much money it’s likely to make him, I wouldn’t put it past him. He is a successful businessman, after all.