Electric cars are having a tough time finding buyers. Brad Plumer takes a crack at explaining what the problem is:

GM is struggling to meet this year’s sales target for the Chevy Volt, and Nissan has sold just 8,000 all-electric Leafs. Part of that might be due to the recession and the steep price tag: Like any new technology, the cars are pricey (the Volt goes for $40,000, though buyers can qualify for a $7,500 federal tax rebate). But 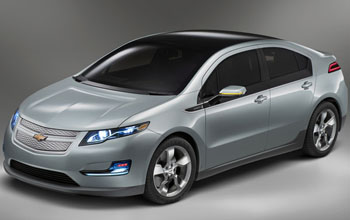 a recent NPR report by Sonari Glinton highlighted another reason sales might be flagging — the fact that early models can’t go very far before needing a recharge, which gives would-be buyers “range anxiety.”

Electric-car advocates have occasionally dismissed range anxiety as irrational. After all, the vast majority of Americans commute less than 40 miles a day. So even a Nissan Leaf, which, realistically, gets about 65 miles on a single charge, should satisfy most of our daily needs. But what about slightly longer trips? Consumers really do worry about getting stranded on the road with a dead battery. Plus, as an executive at Better Place once told me, drivers don’t like feeling hemmed in. “Our research shows that people want to feel like they can get into their car and drive across the country at if they have to,” he said. “It might sound silly, but it’s real.”

At the moment, car companies are racking their brains for ways to allay these fears.

Wait a second. What am I missing here? Of course consumers are worried about getting stranded with a dead battery. That can’t possibly be a revelation to the car industry, can it? It’s the obvious #1 problem with electric cars: even if I normally drive 20 miles a day, occasionally I’m going to want to visit grandma in San Diego and I need a car that can do it. Who on earth thinks this sounds silly?

Besides, the Chevy Volt has a gasoline engine as well as a battery, so its range is the same as an ordinary car. Range anxiety can’t be the problem there unless Chevy has been monumentally incompetent in its marketing campaign. (Always a possibility, of course.)

Surely the answer here is obvious. For pure electric cars like the Leaf, the issue is indeed range. Obviously. For the Volt, the issue is its fantastically high price tag. It’s a Chevy Cruze (yours for $15K or so) that costs more than $30,000. That’s my guess, anyway. Mickey Kaus has a different take:

I recently rented a Nissan Leaf all-electric car. No gas engine, just silent, battery propulsion. It worked fine. It did everything it was supposed to do. It was just incredibly boring.  Not just “doesn’t corner well” type of boring — though it doesn’t corner well — but boring in some corrosive, fundamental, existential way.

I don’t think the Leaf is meant for car guys who want the thrill of a V-8 powering them through tight corners. It’s meant for people who like boring cars. You know, Camry owners. So I’m skeptical that this is an issue either. But then again, I’ve never driven one.