A couple of random notes. Virtually the entire debate was focused on national security: Pakistan, Afghanistan, Iran, and the Middle East. Pakistan was mentioned constantly, and virtually every candidate took the opportunity to demonstrate that they knew the phrase “Haqqani network.” However, not a single one of them mentioned the word “India,” without which any discussion of Pakistan’s motivations is completely worthless. Maybe next time.

Moderators Scott Pelley and Major Garrett did a weak job in general and a terrible job on Europe. Which is to say that in a 90-minute debate taking place while Europe is practically melting down as we speak, they didn’t mention Europe once until the last two 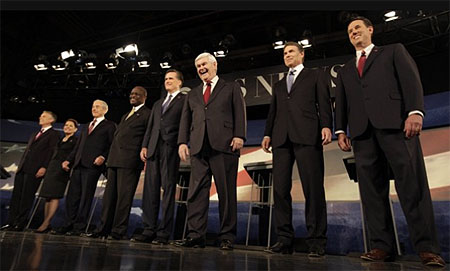 minutes. They managed to ask Jon Huntsman one question about Europe and Rick Perry half of a question. Nice work, guys.

Herman Cain almost charmingly demonstrated that he simply knows nothing about the outside world, and Rick Perry beat expectations by not imploding spectacularly again. All of the candidates insisted that they’d take a completely different approach to Iran than Barack Obama, but then proposed doing almost exactly what Obama is doing. For the most part, though, as Dan Drezner says, the candidates kept the crazy bottled up fairly well. But not always. Fred Kaplan’s review of the crazy is here. Below are my favorite moments from the debate, both good (Huntsman and Paul on torture) and bad (just about everything else). Consider this the Cliff Notes version of the debate.

This is a very dangerous time. If you look at Iran and if you look at Pakistan and if you look at the links with Syria — because Iran is working through proxies like Syria, through Hezbollah, through Hamas — it seems that the table is being set for worldwide nuclear war against Israel. And if there’s anything that we know, President Obama has been more than willing to stand with Occupy Wall Street, but he hasn’t been willing to stand with Israel. Israel looks at President Obama and they do not see a friend.

Herman Cain demonstrates that he knows nothing about Pakistan:

You have said about foreign policy, “America needs to be clear about who its friends are and who its foes are.” So this evening, sir, Pakistan, friend or foe?

We don’t know. Because Pakistan is where Osama bin Laden was found and eliminated. Secondly, Pakistanis have a conversation with President Karzai from Afghanistan and President Karzai has said that if the United States gets into a dispute with Pakistan, then Afghanistan’s going to side with Pakistan. There is a lot of clarity missing, like Speaker Gingrich says, in this whole region. And they are all interrelated. So there isn’t a clear answer as to whether or not Pakistan is a friend or foe. That relationship must be reevaluated.

Herman Cain contradicts himself on torture within 30 seconds:

I believe that following the procedures that have been established by our military, I do not agree with torture, period. However, I will trust the judgment of our military leaders to determine what is torture and what is not torture. That is the critical consideration.

In the last campaign, Republican nominee John McCain and Barack Obama agreed that [waterboarding] was torture and should not be allowed legally and that the Army Field Manual should be the methodology used to interrogate enemy combatants. Do you agree with that or do you disagree, sir?

Well, waterboarding is torture. It’s illegal under international law and under our law. It’s also immoral. And it’s also very impractical. There’s no evidence that you really get reliable evidence. Why would you accept the position of torturing 100 people because you know one person might have information? And that’s what you do when you accept the principle of torture. I think it’s uncivilized and has no practical advantages and is really un-American to accept on principle that we will torture people that we capture.

We diminish our standing in the world and the values that we project, which include liberty, democracy, human rights, and open markets, when we torture. We should not torture. Waterboarding is torture. We dilute ourselves down like a whole lot of other countries. And we lose that ability to project values that a lot of people in corners of this world are still relying on the United States to stand up for them.

Huntsman schools Romney on how to deal with China:

Romney: Well number one, on day one, it’s acknowledging something which everyone knows, they’re a currency manipulator. And on that basis, we also go before the WTO and bring an action against them as a currency manipulator. And that allows us to apply, selectively, tariffs where we believe they are stealing our intellectual property, hacking into our computers, or artificially lowering their prices and killing American jobs.

Huntsman: The reality’s a little different as it usually is when you’re on the ground. And I’ve tried to figure this out for 30 years of my career. First of all, I don’t think, Mitt, you can take China to the WTO on currency-related issues. Second, I don’t know that this country needs a trade war with China. Who does it hurt? Our small businesses in South Carolina, our exporters, our agriculture producers.

[Ed. note: Huntsman is right about the WTO.]

Rick Perry unleashes his war whoop, saying he will by God use torture until the day he dies, but he will never ever call it torture:

Let me just address Congressman Paul. Congressman, I respect that you wore the uniform of our country. But in 1972, I volunteered to serve the United States Air Force. And the idea that we have our young men and women in combat today, where there are people who would kill them in a heartbeat, under any circumstance, use any technique that they can, for us not to have the ability to try to extract information from them, to save our young people’s lives, is a travesty. [VOICE RISES] This is war. That’s what happens in war. And I am for using the techniques, not torture, but using those techniques that we know will extract the information to save young American lives. And I will be for it until I die.

Rick Perry demonstrates that he only barely knows what the euro is:

How do you prevent the European crisis from become a problem on Wall Street?

The French and the Germans have the economic forewithal to deal with this. They have the economy. When you think about the Euro and when it was established, it was done to be a competitor to the American dollar. They knew what they were doing. And now they find themselves with their overspending and– and– the sovereign debt being built up. And–

And that’s a wrap! Time ran out at that point, so we’ll never know just what painfully ignorant point Perry was about to make. Lucky guy.