I confess that I’ve never quite gotten all the enthusiasm over the Khan Academy. For those of you who have never heard of it, it’s the brainchild of Salman Khan, an MIT graduate who started tutoring a cousin in math over the internet a few years ago. He eventually started recording the sessions and turned them into a vast library of short videos explaining various concepts in math and science. Later he branched out into other subjects, some done by other lecturers, and now has a collection of over 2,700 instructional videos at http://www.khanacademy.org.

I’ve dipped into the videos from time to time, and truthfully, they’ve always seemed perfectly competent but not really all that special. On the other hand, they do cover a lot of ground; Khan has a nice, engaging speaking style; and students can watch videos 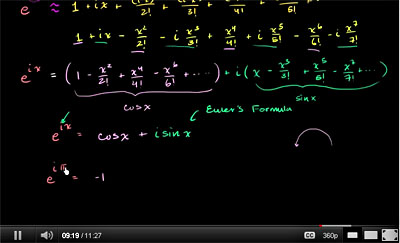 over and over if they’re having trouble. But it turns out there’s more to it. Via Tyler Cowen, here’s a piece in Inside Higher Ed about what the Khan Academy does behind the scenes:

“I think too much conversation about Khan Academy is about cute little videos,” Khan said in an interview last week. “Most of our resources, almost two-thirds of [the staff], are engineers working on the exercises and analytics platform. That, I think, is what we’re most excited about.”

….Using math and computer science concepts decidedly more advanced than most of those in Khan’s video library, the Khan engineers have trained the website’s exercise platform how to predict, with startling accuracy, how likely it is that a student will correctly answer the next practice problem — and whether that student will be able to solve the same type of problem a week, two weeks, and a month later.

They do this by accounting for hundreds of data points that describe, in numbers, the entire history of the relationship between a learner and a concept. “If [a user is] logged in, then we have the entire history of every problem they’ve done, and how long it took them, and how they did,” says Ben Kamens, the lead developer at Khan Academy. “So whenever anybody does a problem, we see whether they got it right or wrong, how many tries it took them, what their guess was, what the problem was, how many hints they used, and how long they took between each hint.”

The Khan engineers are also working to tweak the exercise platform so it does not confuse genuine mastery with “pattern matching” — a method of problem-solving wherein a student mechanically rehashes the steps necessary to solve that type of problem without necessarily grasping, conceptually, what those steps represent.

Interesting! Maybe all those out-of-work Wall Street rocket scientists are finally using their skills for something socially useful. There’s more at the link.