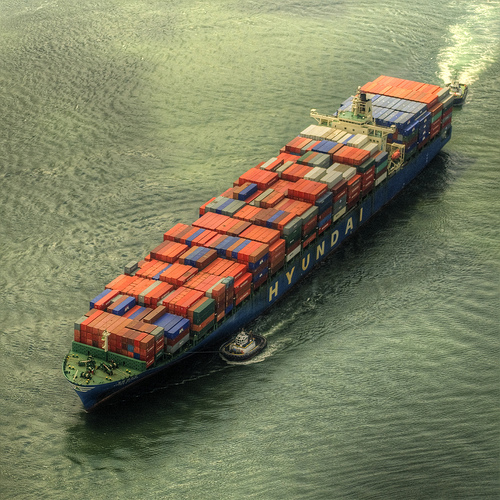 One of the big issues under discussion at the climate talks here in Durban is how to pay for the programs that reduce greenhouse gas emissions and help people adapt to climate change. There’s been a lot of work already done on setting up a multi-billion dollar Green Climate Fund, but it’s still not clear where all that cash would come from.

One option on the table—and a pretty good one—is a tax on global shipping. This is generally called a “bunker” tax, referring to the place where fuel is stored on a ship. The idea is to put a fee on emissions that stem from shipping stuff all over world on cargo boats, which would have the impact of both pushing the industry to reduce its emissions, and creating a source of revenue that can be put into the Green Climate Fund.

Emissions from maritime shipping account for about 3 percent of greenhouse gases currently, but are on the rise. A levy on those emissions could generate quite a bit of money. Oxfam estimates that a fee of $25 per ton of carbon would generate $10 billion per year. Meanwhile, it would only raise the price of shipping by an estimated 0.2 percent. Part of the revenues would likely be rebated to poorer countries to make sure the tax doesn’t put new burdens on their domestic industries, but the fee has still made some developing countries nervous.

It’s also supported by some industry players, including the International Chamber of Shipping, which represents 80 percent of the industry. NGOs like it too. “Raising money for climate action from the shipping industry is just good policy,” said Steve Herz, senior attorney with the Sierra Club’s International Climate Program. “It will help reduce a large and growing source of carbon pollution, will impose little if any costs on consumers, and can be designed to protect the poor from any adverse impact.”

Some developed countries (read: the United States) have been resistant to having any formal directive within the conference on where the money for the Green Climate Fund should come from; that, they argue, should be up to each of the donor countries to decide.

Another option that has been discussed is a fee on aviation. The bloc of least-developed countries has proposed a levy on all international flights, paid for by the ticket-buyer. Their argument, of course, is that if you can afford an expensive international trip, you can afford a few extra dollars to pay for your emissions. But when the European Union recently put a tax on all flights through EU countries, members of Congress freaked out; the House actually passed a bill that would forbid US airlines from paying the fee. A number of other countries were also displeased with the EU’s plan. But it can be hard to get developed countries to commit to public funding for climate, and the specific amounts are offered at the discretion of political leaders or bodies. A funding stream like a bunker or aviation tax is more reliable, and it’s outside the control of a particular country, which makes it an appealing option for many negotiators.