And now for something completely different. The Counterparties blog today highlights an old post from Eamonn Fingleton arguing that Japan’s “Lost Decade” is a myth. This is not the story I’ve heard before, suggesting merely that Japan has done pretty well considering its demographic problems. Not at all. This story suggests that Japan is just flat out lying about its economic growth. For example, here’s a piece of data from Fingleton’s blog:

In 2007 it was discovered that the long-term record in electricity output completely gainsaid the “lost decades” story. Adjusted to a per-capita basis, the figures showed that Japan’s electricity output in the 1990s rose 2.7 times faster than America’s!….Electricity output is widely accepted as an impartial, culture-neutral proxy for economic growth and it is indeed relied on by international organizations such as the IMF and World Bank when a government may not be following 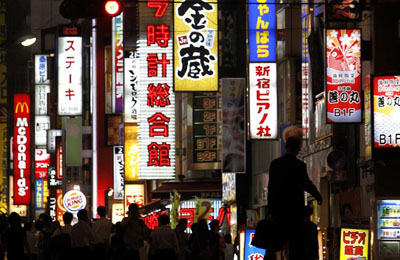 Fascinating! But why is Japan supposedly lying about its economic growth?

For those who know Japanese history, a clue lies in trade policy. The fact is that, constantly since the 1870s (with the exception of a brief interlude in the late 1930s and early 1940s), Japan’s pre-eminent policy objective has been to keep ramping up exports. That policy came very close to derailment in the late 1980s as a groundswell of opposition built up in the West. By the early 1990s, however, the opposition had largely evaporated as news of the crash led Western policymakers to pity rather than fear the “humbled juggernaut.” It is a short jump from this to the conclusion that Japanese officials have decided to put a negative spin on much of the economic news ever since.

What is undeniable is that just as corporate executives enjoy great latitude to juggle their profits up or down for different disclosure purposes (generally up for shareholders, and almost invariably down for the Internal Revenue Service), government officials enjoy even greater latitude to vary a nation’s ostensible growth rate. The fact is that the calculation of economic growth depends on a myriad debatable assumptions (value judgments are critical because most growth these days takes the form of better goods and services, rather than more, e.g. better health care) and, while most governments like to plump up the numbers, it is a simple matter to plug in ultra-conservative assumptions.

So the story here is that bureaucrats reacted to the wave of Japan bashing in the late 80s by bowing and scraping in public and pretending to be in dire straits. And it worked! Everyone felt sorry for them, and we’ve left them alone ever since.

Fingleton has been making this case for a long time, but unfortunately I can’t find an awful lot of details on his blog site. His basic argument has to do with Japan’s extremely healthy trade surplus, its strong currency, and its leading position in “producers’ goods,” a super-technologically demanding sector that includes highly miniaturized components, advanced materials, and super-precise machines that other countries (such as China) use to make final consumer goods.

Is Fingleton right? I have no idea. This is light years above my pay grade at the moment. He sounds a bit cranky on the subject because everyone’s been ignoring him for so long, but that doesn’t necessarily mean he’s wrong. On the other hand, if Japan really has been manipulating its official statistics for two decades, this is one of the biggest, most complex conspiracies in history to stay secret for so long. By now, it would amount to something like a 20-30% cumulative difference between reported GDP and actual GDP, which would be damn hard for the rest of the world not to notice, and it would require the active collusion and silence of thousands and thousands of bureaucrats with not so much as a single leak over the course of 20 years.

Still, it would be interesting to see someone debate him on this subject. Not in a live debate, mind you, which I consider about the worst possible medium ever invented for getting at the truth, but in a printed debate. Bring your best evidence. Show us your tables and your charts. Take the proper time to both make and respond to arguments. I’d read it.