Last year California voters approved an initiative that took redistricting out of the hands of the legislature and gave it to a nonpartisan “citizen commission.” Today, Olga Pierce and Jeff Larson of ProPublica have a story suggesting that Democrats gamed the system by making sure that the commission heard lots and lots of pro-Democratic testimony. “Democrats surreptitiously enlisted local voters, elected officials, labor unions and community groups to testify in support of configurations that coincided with the party’s interests,” the story says.

Now, I don’t doubt for a second that this is true, and in any case, ProPublica seems to have gotten its hands on plenty of evidence to show how this worked. But here’s what I don’t get: Am I supposed to be surprised at this? Of course Democrats tried to get lots of Democrat-friendly testimony in front of the commission. What would you expect them to do? Surely Republicans aren’t so lame that they didn’t do the same thing?

But that’s not the only thing odd about this story. There’s also this:

Statewide, Democrats had been expected to gain at most a seat or two as a result of redistricting. But an internal party projection says that the Democrats will likely pick up six or seven seats in a state where the party’s 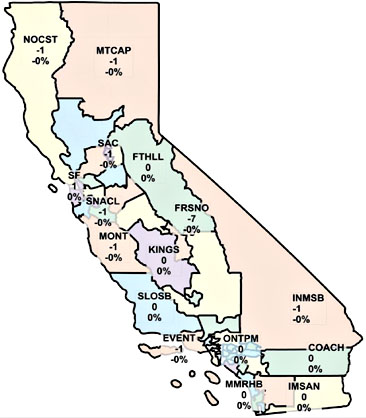 voter registrations have grown only marginally.

“Very little of this is due to demographic shifts,” said Professor Doug Johnson at the Rose Institute in Los Angeles. Republican areas actually had higher growth than Democratic ones. “By the numbers, Republicans should have held at least the same number of seats, but they lost.”

This doesn’t sound quite right either. For starters, that six or seven seat pickup sounds mighty optimistic. I’ll bet the real number is something like half that. But that’s not all. You see, in 2001 Democrats decided to skip the usual partisan gerrymander and instead make a nice, cozy arrangement with their GOP rivals: gerrymandering with the primary goal of protecting incumbents of both parties. It made all the incumbents happy, but it also made the state’s districts a bit more friendly to Republicans than they should have been. By 2010, even a fair-minded, nonpartisan redistricting was bound to produce more Democratic districts than we currently have. (Contra Johnson, California has become considerably more Democrat-friendly over the past decade.) It’s true that Democrats mostly opposed last year’s initiative, but I distinctly remember some of the smarter analysts suggesting that they should calm down because a commission-drawn map was likely to give Dems an easy two or three additional seats.

If Dems do pick up six or seven seats, that would mean the commission really did do them a favor. But if they pick up two or three or four, it’s most likely just the result of reversion to the mean after 2001. I’m curious to see what the California wonks over at Calitics think about all this, but they haven’t written about it yet. If they do, I’ll update and correct as necessary.