Romney may in some sense be the “moderate” candidate in the race, but his business background and the likelihood that Obama will go after it means that his 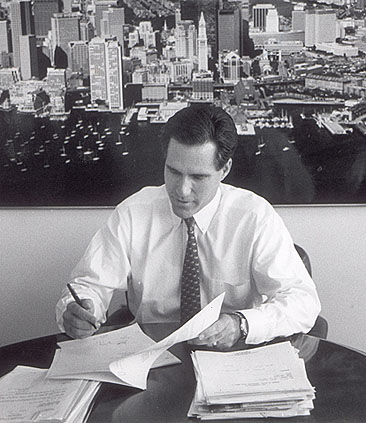 nomination would oddly raise the ideological stakes of the race: make it a referendum on free markets.

There’s some truth to this, of course. Any Republican candidate will talk about free markets and try to make it a central point of the fall campaign, but Romney has really lived it. That makes him a more concrete messenger, someone who can credibly say that he not only believes in free markets, but has lots of experience in making them work.

But I doubt that this really works in conservatives’ favor. You all remember the old saw that Americans are ideologically conservative but operationally liberal? It means that lots of Americans say they’re conservative and like to believe they’re conservative, but when it comes to specific government programs they turn out to be pretty liberal. They like Medicare and Social Security and federal highways and disaster relief and unemployment insurance and all that. Try to cut these things and you learn very quickly just how operationally liberal most Americans are.

Romney has the same problem. In a sense, a guy like Newt Gingrich has the best of all worlds: he can stand on a soapbox and deliver stemwinders about free markets all day long, garnering endless applause along the way. But that’s precisely because he’s able to keep things sort of fuzzy. He can talk about the glories of competition and keeping the government out of your hair  — and then just walk off the stage. Mission accomplished.

But Romney? No such luck. When he talks about free markets, Ponnuru is right: the stakes are higher. He can’t get away with platitudes. His experience at Bain Capital will inevitably be Exhibit 1 in just what he means when he talks about free markets, and let’s face it: short of being the CEO of Goldman Sachs, this is quite possibly the worst possible face you can imagine for a conservative message about the glories of free enterprise and wealth creation. Romney, whether he likes it or not, won’t be able to talk about those glories without also facing up to the human destruction that often follows in its wake. Newt Gingrich is proving that right now, and there’s little doubt that Team Obama will do the same.

When Americans hear about free enterprise from conservative politicians, it’s usually accompanied by images of sunrises over wheat fields, hardworking farmers, and small-town construction workers heading home after a day of honest labor. It is very definitely not accompanied by images of well-coiffed guys in suits and green eyeshades, making millions by sitting in boardrooms and approving mass layoffs by adding a quick line to a spreadsheet before they head out to lunch. But guess what? That’s what you get with Romney whether you like it or not. Americans may be ideological free marketers, but operationally they’re just folks who believe in a day’s pay for a day’s work. If you rub their noses in the the true face of modern capitalism, they aren’t going to like what they see.