The Congressional Budget Office (CBO) weighed in today on the fraught subject of whether federal employees are paid more than comparable workers in the private sector (full report here). Their analysis attempted to control for occupation, years of work experience, geographic location (region of the country and urban or rural location), size of employer, and various demographic characteristics (age, sex, race, ethnicity, marital status, immigration status, and citizenship). Their conclusion should come as no surprise: When you account for both wages and benefits, Uncle Sam is generous toward those with less than a college degree and stingy toward those with PhDs or professional degrees. 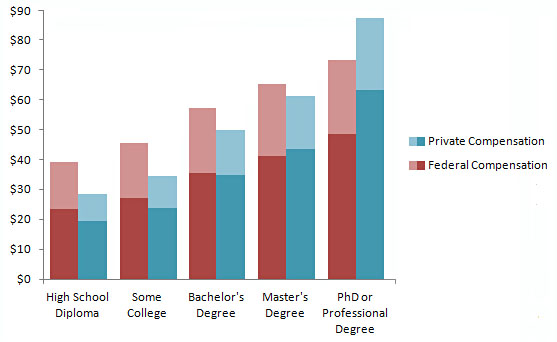 According to the CBO, the federal government employs a lot more workers with doctorates or professional degrees than private sector companies do (7 percent of the workforce vs. 3 percent of the workforce). Nonetheless, when you look at the overall number, they figure that the federal government’s payroll is 16 percent higher than it would be if it paid its workers private sector scales.

Another interesting result: If you look at the range between the lowest and highest paid workers, it’s about the same in the public and private sectors for both high school grads and college grads. But the private sector has a way higher range for those with doctorates. The federal government tops out at about $70/hour in wages for the top decile of workers while the private sector tops out at about $140. If you were to look at the top 1 percent instead of the top 10 percent, the difference would probably be even starker.

None of this should come as a big surprise. Federal jobs have always been plum positions for blue-collar workers, while for highly-educated professionals it’s something you do if you either want a lot of job security or are really dedicated to public service. If you’re a doctor or a lawyer, you can almost certainly do better in private practice than you can working for the government.

Would the quality of the federal bureaucracy improve if we paid less for low-level jobs and used the money we saved to compete better for top-level managers and other professionals? Maybe! But the CBO punts on this: “A key issue in compensation policy is the ability to recruit
and retain a highly qualified workforce. But assessing how changes in compensation would affect the government’s ability to recruit and retain the personnel it needs is beyond the scope of this analysis.” Maybe next time.

POSTSCRIPT: Just to be clear, this study is for federal workers only, not all government workers. Other studies I’ve seen suggest that state and local governments show similar dynamics (high school grads paid more than private-sector workers, professionals paid less), but the difference isn’t as large and the overall impact on payroll is close to zero.