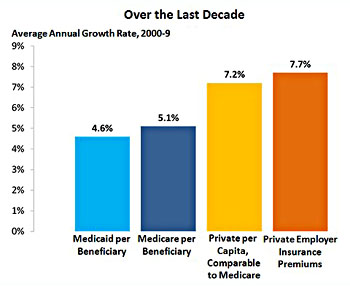 Over at Economix, Laura D’Andrea Tyson says it’s pretty unlikely that competition between insurers will lower healthcare costs, as Paul Ryan and Ron Wyden hope. After all, private healthcare premiums — where competition should be keeping costs down — have grown at a faster rate over the past 40 years than Medicare costs per beneficiary. The actual numbers she cites, from the Center for Budget and Policy Priorities, seem a little iffy to me since they compare two different things (premiums vs. actual costs), but still, there’s plenty of evidence to suggest that Medicare really is better at controlling costs than private insurers. But why?

And Medicare has considerable negotiating leverage with providers as a result of its huge enrollment. Private insurance plans are unable to negotiate payment rates with providers that are as low as Medicare’s rates, even though Medicare’s negotiating authority is tightly limited and often undermined by Congress.

This actually seems unlikely to me. Companies like Aetna and Blue Cross are plenty big enough to negotiate favorable prices from healthcare providers. And they do. I suspect the dynamic driving higher costs in the private sector actually lies mostly with private employers, who compete with each other to keep their workers satisfied. This means that they help drive costs up, not down, and healthcare insurers respond to this. What’s more, employers can always make up for higher premiums with smaller wage increases, which gives them less incentive to pay a lot of attention to healthcare costs in the first place. As long as their total compensation costs stay within reason, they don’t much care whether it’s going out in wages or in benefits. (In fact, since healthcare benefits aren’t subject to income tax, they actually have a small incentive1 to increase benefits at the expense of wages.)

So I guess I wouldn’t give Medicare quite such huge props for controlling costs. There’s probably less there than meets the eye. Still, even if the numbers aren’t as impressive as Tyson suggests, there’s not much question that private healthcare providers have never done better at controlling costs than Medicare, and have almost certainly done at least a little worse. This doesn’t bode well for the notion that unleashing the forces of free market competition will do much good for Medicare.

1Austin Frakt emails to point out that the incentive isn’t really all that small. The value of a dollar of healthcare benefits is actually substantially higher than a dollar of wages.