You know those basketball rematches where a team that got pummeled last time suddenly comes out totally on fire and wins by a mile? It’s never clear quite why that happens, but it happened in the Republican debate tonight. I don’t know what Romney ate for breakfast this morning, but he came alive and wiped the floor with Newt Gingrich in this debate. He went after Gingrich for his Freddie Mac 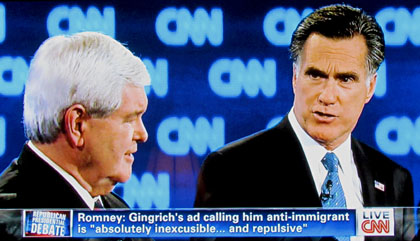 connections and made it stick. He was outraged when Newt said he was anti-immigrant, and for once he actually sounded outraged. And when Newt tried to buy some anti-media cred by attacking Wolf Blitzer, he got pwned by both Blitzer and Romney:

GINGRICH: Wolf, you and I have a great relationship, it goes back a long way. I’m with him. This is a nonsense question. Look, how about if the four of us agree for the rest of the evening, we’ll actually talk about issues that relate to governing America?

BLITZER: But, Mr. Speaker, you made an issue of this, this week, when you said that, “He lives in a world of Swiss bank and Cayman Island bank accounts.” I didn’t say that. You did.

GINGRICH: I did. And I’m perfectly happy to say that on an interview on some TV show. But this is a national debate, where you have a chance to get the four of us to talk about a whole range of issues.

….ROMNEY: Wouldn’t it be nice if people didn’t make accusations somewhere else that they weren’t willing to defend here?

Ouch. Gingrich has tried that bit before about nasty attacks being OK when you’re on some radio show or something but not when you’re on national TV, and for some reason he’s gotten away with it even though it’s transparently self-serving and ridiculous. Tonight he didn’t.

This was all in the first half hour, but by then the debate was over. Romney lost a bit of his mojo later on and reverted to the stuttering, stumbling Mitt that we’ve seen in the last two debates, but not enough to hurt him, especially after Newt was forced to endure ten minutes of attacks over his support for a lunar colony during the second hour. This attack from Romney was both brutal and effective:

ROMNEY: I spent 25 years in business. If I had a business executive come to me and say they wanted to spend a few hundred billion dollars to put a colony on the moon, I’d say, “You’re fired.”

The idea that corporate America wants to go off to the moon and build a colony there, it may be a big idea, but it’s not a good idea. And we have seen in politics — we’ve seen politicians — and Newt, you’ve been part of this — go from state to state and promise exactly what that state wants to hear. The Speaker comes here to Florida, wants to spend untold amount of money having a colony on the moon. I know it’s very exciting on the Space Coast.

In South Carolina, it was a new interstate highway, and dredging the port in Charleston. In New Hampshire, it was burying a power line coming in from Canada and building a new VHA hospital in New Hampshire so that people don’t have to go to Boston.

Look, this idea of going state to state and promising what people want to hear, promising billions, hundreds of billions of dollars to make people happy, that’s what got us into the trouble we’re in now. We’ve got to say no to this kind of spending.

Coming from a guy like Romney who’s famous for his willingness to say pretty much anything to anybody, this was a great job of jiu jitsu. It was also true. Gingrich really has been pandering to state interests relentlessly, and nowhere more so than in Florida.

I don’t know how much debates really matter compared to the tidal wave of advertising that’s inundating Florida right now, but if they do matter then Romney won the Florida primary tonight, and almost certainly the nomination along with it. The punters on Intrade obviously agree: Romney’s chances of winning shot up to 89% tonight and Gingrich’s plummeted to 5%. Adios, Newt.