Since I’m feeling lazy this morning, I’m going to outsource my Jon Huntsman commentary to a reader. As it happens, he says exactly what I was thinking anyway about Huntsman’s exit from the race:

This was a bit of a headscratcher. Same day he gets out, he endorses Romney. He has had some of the most effective anti-Romney ads out there, and because his focus was on NH he was all anti-Romney all the time. The extremely quick pivot to endorsement strikes me as (a) exceptionally crude and cynical resort to standard also-ran politician practices; or (b) a deal was cut (appointment?), which would only amplify (a).

Seriously, if I was going to run in 2016 I would try to avoid leaving something on the record like this that says everything I said up until 15 minutes ago was BS. Striking lack of any effort at authenticity. Unless he has 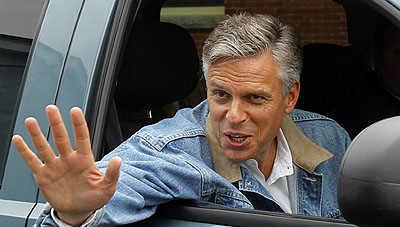 written off 2016 entirely, then who cares. Huntsman just seems really bad at the public image thing.

I believed from Day 1 that Huntsman was running for 2016, which gave him way more scope to run a relatively honest and dignified campaign than any of the folks who were genuinely running for this year’s nomination. And yet, Huntsman just never seemed to attract a following, not even the Tsongas/Anderson/McCain-ish kind of cult that presidential elections so often produce. These are the folks who rally around the guy willing to “speak hard truths” and avoid “politics as usual.” The media usually swoons for them too. But not Huntsman. He got a few followers, and a bit of decent press, but that was it. He just wasn’t any good at projecting an intriguing image.

And the quick pivot to Romney just amplifies that shortcoming. Politically, maybe he thought it made him into the kind of team player who was more likely to attract establishment support in 2016. Maybe he thought there wasn’t much time left to make an endorsement that wasn’t just pro forma. But after the savaging he’s given Romney, turning around so quickly sure does make him look like a guy who was just throwing lots of anti-Romney crap against the wall whether he believed it or not.

Who knows? Maybe the story here is that Huntsman just isn’t that great a politician. After all, he is the guy who apparently thought that quoting a bit of Chinese in the last debate counted as a devastating riposte. But I guess he might make a decent Secretary of Commerce.