Steve Benen, posting from his new home at Rachel Maddow’s online presence, suggests that at this point in the primary process Republican voters ought to be getting happier with their candidates:

And yet, as the Pew Research Center found, rank-and-file Republicans are finding themselves less satisfied with their presidential choices, not more. As the Pew report, released yesterday, explained, “In fact, more Republican and Republican-leaning registered voters say 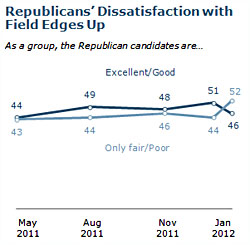 In other words, this field of candidates isn’t just unappealing to the party’s own voters; it’s increasingly unappealing.

But how unusual is this, really? Maybe someone with a vast collection of past polling data can weigh in on this, but I’m not sure that we’re seeing anything all that out of the ordinary. Campaigns usually get nastier as they get closer to their endgames, and that nastiness often translates into increased voter dissatisfaction. This year’s Republican primary only entered its nuclear phase after New Hampshire, and it’s not too surprising that this has driven up everyone’s negatives.

Now, this is the point at which I’d normally remind everyone that it’s only January (hard to believe, I know, after the debate marathon of the past five months) and there’s plenty of time for everyone to cool down before summer. And I think that’s exactly what’s going to happen. Still, there’s that little niggling voice in my head saying “Newt, Newt, Newt…..” Will Newt Gingrich, even after he’s obviously lost, continue his scorched-earth campaign against Romney? Will Sheldon Adelson fund this doomed effort? I’d guess no. But it’s a soft, unconvincing no. He just might, after all.