It looks like Mitt Romney has won the Iowa Bowl in triple overtime by a margin of 8 votes over a resurgent Rick Santorum. Very exciting! So now we have a new anti-Romney who will suddenly learn the dangers of being in the spotlight and having voters actually get to know him; a promise from 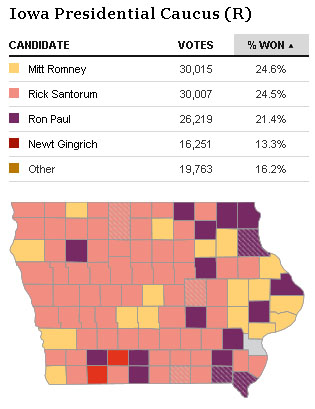 a bitter Newt Gingrich that the gloves are off and he’s now going to crush the Mittster and sow the smoking remains of his campaign with salt; the apparent end of Rick Perry; and a few days of chuckleheaded nonsense from people who should know better that Ron Paul owes a big part of his third-place success to his anti-war message and might now ride the burgeoning isolationist youth vote in the Republican Party to victory. (Actual reality: Ron Paul owes his success to his usual combination of economic crankery and fanatic opposition to social welfare in every possible form.)

I have my own theory about Rick Santorum, though, and here it is: he surged because there were no debates in the final three weeks before Iowa. Santorum is possibly the whiniest, least appealing debate candidate I’ve ever seen in my life, and I figure he lost a few thousand votes every time he went on the air. So the calendar helped him a lot. Unfortunately, there’s a debate coming up this Saturday, which should be perfectly positioned to allow the voters of New Hampshire to remind themselves that they really don’t want to see this guy on their TV for the next four years. That’s bad luck for Santorum, but them’s the breaks.

UPDATE: Dave Weigel points out something interesting: in 2008, when conservatives were supposedly down in the dumps, about 102,000 Republicans showed up to vote in Iowa. (The balance of the votes were independents and crossover Democrats.) This year, when conservatives are supposedly psyched to crush the demon Obama, about 91,000 Republicans showed up to vote. What happened to the enthusiasm gap?