Marriage rates are down in America, and they’re down far more among the poor and working class than among those who are better off. That’s old news. But why are marriage rates down? I don’t know, and I gather that Michael Greenstone and Adam Looney of the Hamilton Project don’t really know either. However, they suspect that there’s a fairly straightforward relationship between income and marriage: as incomes go down, so do marriage rates.

Maybe. The income numbers in the chart below don’t look very familiar to me (Median male earnings have declined 40% since 1970? Earnings in the top 5% have increased only 20%?), but if you take them at face value the relationship between earnings and marriage rates is indeed remarkably striking. The question is whether the correlation here is also causal, and if it is, which direction it runs. Have declining earnings provoked lower marriage rates, or have lower marriage rates affected men’s earnings? This issue is much more a hobbyhorse among certain precincts on the right than on the left, but I think it’s worth paying more attention to regardless of where you sit on the left-right axis. Family stability and community stability are important no matter what the causes of their decline may be, and figuring out those causes is worth some skull sweat.

UPDATE: On the other hand, some skull sweat isn’t very worthwhile at all. Here is David Frum taking on Charles Murray’s latest attempt to handwave away the fact that declining earnings among working-class men may have had a wee effect on their attachment to the labor market, the marriage market, and to various other social norms of the 50s. 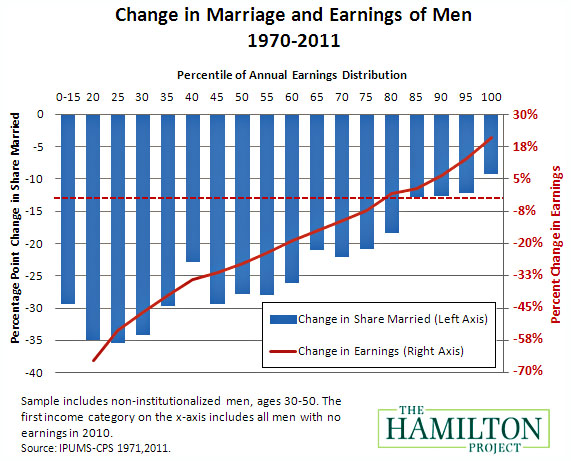