Suzy Khimm reports on a fascinating new bit of research about the effect of language on people’s tendency to save for the future:

Kevin Chen examined two groups of languages in a new working paper: languages that use words like “shall” or “will” to indicate the future, and languages that frequently rely on context rather than a separate verb tense for the future. Speakers of the first set of languages, like Greek, Italian, and English, tend to see the present and future as more disconnected. By contrast, languages that don’t grammatically distinguish between present and future events, like German, Finnish and Mandarin, “lead their speakers to take more future-oriented actions.”

Chen points to a long body of research showing that grammar can affect cognition and ultimately behavior, and discovers that speakers of German and other weak future-time reference languages are inclined to behave as though the future is an extension of the present: They’re 30 percent more likely to save in any given year, have more retirement savings, and are better at taking care of their long-term health.

Is it science or is it bullshit? Good question. At first, when I looked through the paper, I came across a chart (on page 12) that struck me as extremely weak. The line-fitting was mostly based on a tiny number of bilingual countries, and while this is a good attempt to tease out effects that don’t depend on nationality, it’s still a tiny number of countries with extremely wide variation around the trendline.

But then, on page 16, there’s a more compelling chart. It’s strictly for OECD countries, so you’re basically comparing a bunch of rich economies to each other, and visually at least, it’s fairly convincing. The cluster of countries on the right with low savings rates is a sea of red, indicating that they all speak languages that have a strong “future-time reference” structure. On the left, the vast majority of high-savings countries have weak FTR structures. 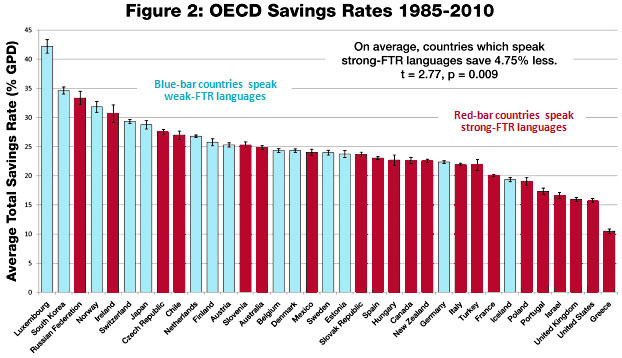 Fascinating! But so far, only suggestive. As Chen says: “One important issue in interpreting these results is the possibility that language is not causing but rather re?ecting deeper differences that drive savings behavior.” However, he believes the evidence points in the direction of language having an effect that’s independent of culture: “While both language and cultural values appear to drive savings behavior, these measured e?ects do not appear to interact with each other in a way you would expect if they were both markers of some common causal factor.”

We already know that you are what you eat. Maybe you’re also what you speak. Now you have yet another excuse for why your high credit card bills aren’t really your fault.

BONUS TIDBIT: I was initially surprised that Luxembourg and France were coded differently. Don’t they speak French in Luxembourg? Yes they do, but it turns out the main language is actually Luxembourgish. I had no idea. If some presidential candidate had mentioned that, I would have thought he was an idiot, the kind of person who thinks they speak Argentinian in Argentina. Live and learn.