For me, I’m down with MMTs up to a point. I very much agree that deficit reduction has been deeply miscast as pure virtue, with little regard for its economic impact. As I’ve written many times here, the first question re fiscal policy, at least until we’re reliably headed toward full employment is not “how quickly does your deficit come down?” It’s: “is your deficit large enough to replace lost private sector demand?”

This emphasis on using the tools of government, including the ability to print money and run large budget deficits in times of market failure, is MMT’s most important contribution to the current debate.

The more important side of MMT is its insistence that we should run substantial deficits even when the economy is in good shape. Only when inflation appears ready to run out of control should we use budget surpluses to rein things in. But MMT proponent Jamie Galbraith says that pretty much never happens:

Economists in the Modern Monetary camp concede that deficits can sometimes lead to inflation. But they argue that this can only happen when the economy is at full employment — when all who are able and willing to work are employed and no resources (labor, capital, etc.) are idle. No modern example of this problem comes to mind, Galbraith says.

“The last time we had what could be plausibly called a demand-driven, serious inflation problem was probably World War I,” Galbraith says. “It’s been a long time since this hypothetical possibility has actually 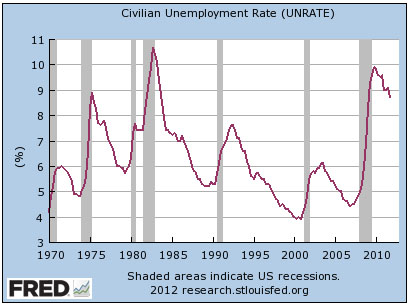 been observed, and it was observed only under conditions that will never be repeated.”

In some sense, this all comes down to a question of how scared we should be of inflation. Mainstream economic opinion says that a strong focus on full employment will inevitably risk high inflation, just as our current obsession with low inflation produces generally high unemployment. If we were focused on, say, a target unemployment rate of 4%, we’d see some periods where unemployment fell below that rate and some where it rose above it. But as the chart on the right shows, that’s not what we’ve had over the past few decades. Instead, because our economic policy has been focused strongly on low inflation, we see only a couple of brief periods in which unemployment barely got close to 4%, followed immediately by a recession that kicked it back above 6%.

So should we focus instead on a genuine target of 4% unemployment, reining in budget deficits only when we fall well below that? That depends a lot on what you think the productive capacity of the country really is, and the mainstream estimate of NAIRU, the highest unemployment rate consistent with stable inflation, is around 5.5% right now. If that’s the right estimate, then you could argue that we’ve been doing OK for the past few decades. But if full employment is really more consistent with an unemployment rate of 4%, then we’ve been wasting an awful lot of productive capacity for nothing.

Your instinct on the oil price is on target, in my view. The inflation threat that we face doesn’t come from deficits or high employment — it comes from the cost and price of energy. But managing this is not within the competence of the Federal Reserve.

I have been trying to call attention to this issue for years (it’s in my 2008 book, The Predator State, and in articles written recently with Jing Chen, most recently in the Cambridge Journal of Economics, which contains the following paragraph:

Our central argument is that stimulus fell short — and would have fallen short even if the amounts had been greater — because increased demand under existing high-fixed cost structures drove, or would have driven, the price of resources too high, too quickly. The constraint on growth was not inflation generated by easy money, but the combination of the rising real marginal cost especially of energy, combined with monopoly control of and speculative instability in energy prices, which together act as a choke-chain on the return to full employment.

But the endless debate over deficits, debt and quantitative easing tends to obscure this issue — and in public discourse one cannot easily answer questions that are not being asked. So thanks for making the point, and keep digging at it.

Apparently I am a Galbraithian but just didn’t know it.